Upstart clickair is giving easyJet a hard time on its well established Geneva to Barcelona route. In an exclusive anna.aero farewatch return fares were determined on the 14th June for a one night business trip setting off from Geneva any time in the subsequent two weeks.

Swiss was always the most expensive except for a weekend trip from Saturday 16 June to Sunday 17 June. Notice the price spike for 23/24 June. This again is a weekend period reflecting that for LCCs Sunday evening flights are peak periods for maximising revenue.

Over the two week period the average Swiss return fare was €341 compared to easyJet at €159 and clickair at €117. In recent presentations clickair CEO Alex Cruz has claimed that the airline has the second lowest unit costs amongst European LCCs after Ryanair. Their pricing on this route certainly suggests they feel they can afford to be aggressive on pricing. 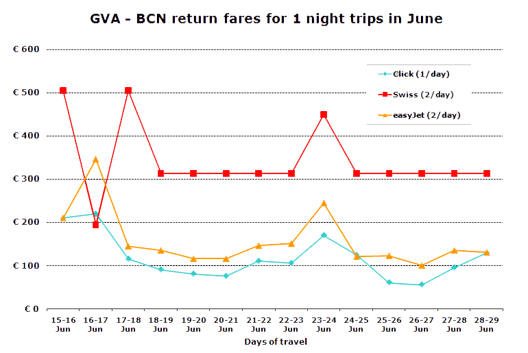