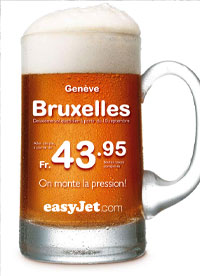 Friday 29 June marked a special day in the history of easyJet as it launched flights to Brussels (BRU) for the very first time. As an eighth Airbus A319 is stationed in Geneva (GVA) easyJet launches its first route to the Belgian capital with a daily flight. The only competition on the route is from the new Brussels Airlines which operates up to seven flights per weekday.

With LCC Virgin Express having merged with SNBA to create a single airline it seems easyJet decided now was a good time to put a toe in the water and determine the potential of BRU as a destination and possible future base. To appeal to business traffic easyJet will increase frequencies to double-daily from 10 September when some of the summer seasonal routes wind down.

The additional capacity at Geneva also sees the launch of new routes to Cagliari (a seasonal route that only operates for a couple of months) and Porto. Since the start of the summer season easyJet has dropped its third rotation to Amsterdam and added extra flights to Palma. It has also dropped the morning Rome Ciampino service in favour of starting services to Olbia and Bordeaux earlier than originally planned. From early July the third Paris frequency is sacrificed to allow room for a daily Olbia service.

The aircraft rotation plan for the Airbus fleet at Geneva for the first week of July is shown below:

For the week commencing 2nd July 2007 the leading five carriers at GVA in terms of frequency and seats are:

easyJet has direct competition on many of the routes it offers. Swiss only competes significantly head-to-head on Barcelona and Prague whereas regional Flybaboo competes on Nice, Olbia and Prague. easyJet’s only true LCC competition comes on Barcelona where Click Air is also competing. An analysis of the fares on offer on this route can be found in this week’s anna.aero Farewatch.