Until recently the eastern Scottish regional airport of Dundee offered only one destination, London City Airport. This is operated by Scot Airways with four flights per weekday on 31-seat Dornier 328s. This route carried 50,000 passengers in 2006. Now thanks to a new airline, Flywhoosh, the number of destinations has tripled. Since 29 May an ATR42-300 with 46 seats has been operating twice a day to Birmingham and once a day to Belfast City.

The aircraft is owned and operated by White Eagle Aviation, a Polish airline which is based in Warsaw and is part of the Curtis Group which is owned by the husband and wife team of Zbigniew and Katarzyna Niemczycki. Other Curtis Group companies are involved in aircraft maintenance, construction, drug manufacturing and electronics.

Dundee was once a great whaling port and was known for its ‘three js’ – jute, jam and journalism though only the journalism industry is still thriving thanks to local company DC Thomson, publishers of legendary children’s comics The Beano and Dandy. The airport is also convenient for Carnoustie golf course, the venue for this year’s British Open from 16-23 July. One-way fares start from £20.07 (excluding taxes and charges). 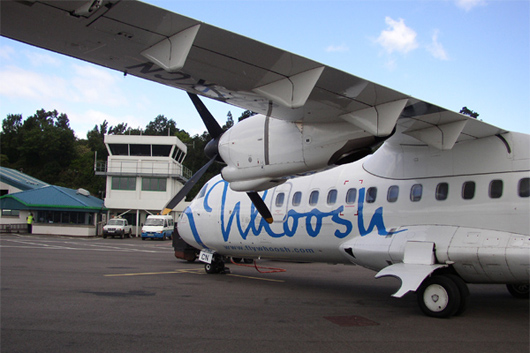 D’oh! The strange case of the route that wasn’t

The tranquil Northern French town of Deauville looks set to stay that way after a protracted saga involving Ryanair. A route from London Stansted to Ryanair had been announced last year with a planned start date of 31 October 2006. However, this was quickly put back to 1 March 2007. Then, with less than a month to go before launch, Ryanair announced that it would not be starting the thrice weekly route after all.

This despite an advertising campaign in the UK, which Ryanair had clearly refused to fund in any way since its logo was wiped off the (Irish-registered) aircraft shown in the picture and no mention was made of the fact that the route would be operated by Ryanair. Many local residents it seems were delighted with the decision, having campaigned vigorously against the start of the service which, as they saw it, would involve French money being used to support a ‘foreign’ airline and lead to an influx of the wrong kind of tourists. 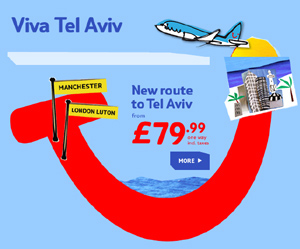 Tel Aviv will this winter receive its first low-cost flights when Thomsonfly begins thrice-weekly services from London Luton and Manchester. Fares start at £79.99 ($160) one-way (including taxes).

Last year, according to UK CAA statistics, the UK to Israel market was virtually unchanged at 650,000 passengers of whom 80% are travelling on scheduled services from London Heathrow with either El Al or British Airways. El Al also operates less than daily scheduled services to London Stansted. Charter traffic from various UK airports accounts for around 12% of the UK market to Tel Aviv. In 2006 Ben Gurion International airport saw traffic pass the 9m mark for the first time since 2000. The busiest month was August with just over a million passengers while February had barely half that figure.

Israel is currently renegotiating its bilateral with the UK as it is keen to attract more tourists to the region. Until this occurs Thomsonfly’s Luton services will operate as charter flights.

Following eight months of flying between Hong Kong and London Gatwick newcomer Oasis Hong Kong recently launched its second route to Vancouver. This service will operate six times per week and the airline guarantees that at least 10% of all economy class seats will be available for HK$1,990 (around US$255) one-way for at least a year.

The new route has required the airline to purchase three additional 747-400s from ANA. Air Canada currently operates daily on the route and Cathay Pacific double-daily.

The impact of low fares on the market between the UK and Hong Kong can clearly be seen from the most recent UK CAA Airport statistics which show that year-on-year traffic was up 50% in April and May. In 2003 traffic between the UK and Hong Kong fell over 50% during April and May after the SARS outbreak there. It took around four months for traffic to return to previous levels. 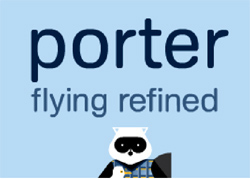 Toronto City Center Airport based Porter Airlines has added Halifax to its network from 29 June. The national airline which launched last October with flights to Ottawa operates Q400s in a 70-seat configuration. For the summer season Porter is reducing frequency on its Ottawa service from 10 to six daily return fights and also reducing Montreal frequencies from nine per day to six.

Halifax will be served ‘directly’ with four daily flights, two via Ottawa and two via Montreal. In effect, this also creates new services between Ottawa and Halifax and Montreal and Halifax. This schedule will operate until 4 September when the schedule reverts back to just focussing on Montreal and Ottawa.

Air Canada’s regional subsidiary Jazz is in dispute with the airport owners, the Toronto Port Authority, over access to terminal facilities. Jazz suspended services from the airport in February 2006. To get access from downtown to the island airport requires a short 120 metre ferry ride across Toronto’s inner harbour.

Porter has recently been granted traffic rights to serve the US and plans to start with flights to New York Newark. Other destinations are likely to follow quickly.

The role of butterflies in low-cost airline logos…

It’s strange isn’t it? You wait for one airline to come along with a butterfly as a logo and then three come along all at once. Just coincidence or something altogether more sinister? The airlines concerned are:

Albania’s first LCC started flights in March 2006 and this summer will fly from Tirana to 16 destinations across Europe, though mostly at frequencies of between two and three flights per week.

On Air launched from Pescara, Italy in May 2007. Flying to eight destinations, including two in the Ukraine, at low frequencies to help generate inbound tourism, the airline subcontracts the flying to different airlines such as EuroAir of Greece and Ukraine International.

The new US LCC started flights from Columbus, Ohio in May 2007 and operates Airbus A319s to California, Florida, Kansas, Boston and even serves the Seattle/Vancouver area.