Skybus – re-inventing the US LCC (as Ryanair) 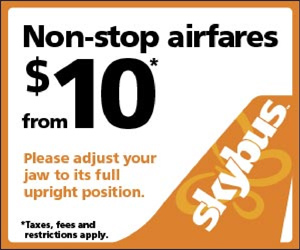 Columbus, Ohio may have taken its name from the great naval explorer but in future it may be better known as the birthplace of a new breed of American low-cost airline. On 22 May 2007, an Airbus A319 of Skybus made its maiden commercial flight from Port Columbus International Airport. It heralded the launch of an airline that claims to be re-inventing the low-cost airline concept using lessons learnt from Europe’s Ryanair. With headline fares of just $10 (not including taxes and various charges), the airline hopes to offer the lowest possible basic fares by charging for a variety of extras and operating to some relatively unknown airports.

With around 6.7 million passengers in 2006 (+1.9%), Columbus (CMH) is a medium-sized airport by US standards with a catchment area of 6.8 million people within 90 minutes of the airport. The largest incumbent airline in terms of passengers in 2006 was Southwest with around a 23% market share (see graph). Before Skybus came along the airport was served by around 12 major airlines operating over 180 daily non-stop flights to nearly 40 destinations.

The second largest carrier, Chatauqua, does not operate in its own right but flies mostly regional jets on behalf of American, Continental, Delta, United and US Airways. Curiously, it operates to Washington on behalf of three different airlines – Delta, United and US Airways. With no single airline dominating the airport, Skybus clearly see this as an opportunity to make an impression. Southwest is the major carrier at CMH and it serves the following destinations:

JetBlue only began operations at Columbus last October using its smaller Embraer 190s to serve Boston (daily from 18 October 2006) and New York JFK (four times per day from 3 October 2006). Load factors for JetBlue up to the end of 2006 averaged 60.3%. This compares with Southwest’s load factor at CMH of 71.8% for 2006.

The graph above shows the dominant role that Chicago (O’Hare and Midway) plays in the traffic flows at Columbus. Apart from domestic flights, Toronto (Canada) and Cancun (Mexico) are also served.

Columbus fares are about average but getting cheaper

According to US Consumer Air Fare Reports for 2005 and 2006, average air fares from Columbus are around the national average. Without the significant presence of Southwest it seems likely that Columbus would be above the national average. The commencement of two new routes by jetBlue during Q4 has had an immediate impact on the average fare paid at Columbus. The full effect of Skybus’ routes and fares will not be fully appreciated until the data for Q3 2007 is published in early 2008.

The appetite for low fares is clear from the impact of three new routes launched during the last quarter of 2006. Southwest launched triple daily services to Philadelphia and jetBlue launched Boston and New York JFK services. The impact they had in these markets can be seen in the table below:

Skybus – you’re flying to where?

Following the lead of European LCCs, most notably Ryanair, Skybus has unearthed some underutilised airports which it is using to serve major population and tourist areas. These include:

Portsmouth International Airport at Pease
Conveniently located two miles from downtown Portsmouth off Interstate 95, just 44 miles from Boston and 50 miles from the major cities of Portland and Manchester.

Piedmont Triad International Airport at Greensboro
Located at the center of North Carolina and mid-point on the East Coast PTIA is positioned at the hub of the Piedmont Triad region, between the cities of Greensboro, Winston-Salem and Highpoint just 64 miles from the Raleigh-Durham hi-tech area.

Westover Metropolitan Airport at Chicopee
WMA is located in Chicopee, Massachusetts, near the city of Springfield. Hartford, Connecticut is 31 miles away.

Despite only starting commercial services on 22 May 2007, by mid-July Skybus will have five Airbus A319s flying to a variety of destinations from their Columbus hub. The launch dates for each of the destinations is:

All of these destinations will be served daily with Burbank, Fort Lauder- dale and Portsmouth served double-daily. The tables below show the destinations served by each aircraft and when they depart CMH and return back to CMH. This is the planned schedule from 18 July onwards.

With no ‘firewall’ anywhere in the aircraft rotation plans, any early morning delays could have significant knock-on effects unless the block times have been generously padded to enable delays to be absorbed. Scheduled flight times vary between just over an hour (to Greensboro and Richmond) to four and a half hours to the West Coast destinations.

At least ten seats on all flights will apparently be sold at the $10 headline fare. The Skybus approach is that customers pay for ‘extras’ whether this is checked-in bags ($5) or an on-board soda ($2). Booking is currently only available through the internet.

Taxes and charges, which are not included in the ‘headline’ price, include the September 11 Security Fee, Passenger Facility Charge and US Flight Segment Tax. One of the fleet is already generating extra revenue by operating as a ‘logojet’ promoting Nationwide.

Skybus CEO is travel industry veteran Bill Diffenderffer who is also the author of a management book ‘The Samurai Leader’ which ranks in the top quarter million on the amazon.com bestseller lists. Former Southwest people can be found in various positions including President and COO (Ken Gile), VP Airports/Ground Operations (Denis Carvill) and VP Marketing (Judy Timberlake).