The last decade has been something of a rollercoaster ride for the major airport that serves the Belgian capital. The collapse of the national flag carrier Sabena in 2001, a change in ownership, the emergence of low-cost competition from a nearby airport and most recently the merger of the two leading local airlines, SNBA and Virgin Express, to create Brussels Airlines. A new logo and brand has also been introduced to help communicate the dynamic changes that are now taking place at the airport.

Last year, commercial passenger numbers grew by 3.3% to 16.6 million, representing a fourth successive year of growth thanks, in part, to new routes to Addis Ababa, Beijing, Durham Tees Valley, Krakow and Palermo. However, passenger traffic is still five million below the airport’s all-time peak of 21.6 million in 2000, when Sabena was at its biggest and boldest. Transfer traffic contributes less than 8% of total traffic, one of the lowest shares among major airports in Europe. Passengers per movement were just 71.5, lower than nearly every major airport in Europe except Vienna.


For the winter season, a further two new LCC routes have also been announced. Vueling will fly to Seville and easyJet will start a daily service to its main German hub at Berlin Schönefeld.

The launch of two new services by airlines new to Brussels means that passengers now have a choice of eight daily flights to seven US airports with six different airlines. New York JFK is served by American and Delta, while Continental flies to Newark. Last year, New York was the top long-haul destination (though traffic was down nearly 6%) and ranked 10th overall at the airport.

Later this summer, India’s Jet Airways will launch services from Mumbai to New York via Brussels followed by a service from Delhi to Toronto via Brussels. The airline plans to codeshare with Brussels Airlines subject to regulatory approval.

With the removal of the Virgin Express brand, Brussels no longer has a home-based dedicated LCC. The new Brussels Airlines promises cheap seats on many of its flights, but is closer in service quality to its predecessor SNBA than to Virgin Express. Foreign LCCs have had problems in stimulating traffic to Brussels over the years with the likes of bmibaby and helvetic entering and then leaving the market quite quickly.

SkyEurope now offers low-cost flights to four destinations – Budapest, Krakow, Prague and Vienna. Three of these are new this summer. Vueling has been offering daily flights to Barcelona and Valencia since mid-2004, though an attempt to add Madrid proved unsuccessful. Atlas Blue, an LCC subsidiary of Royal Air Maroc, flies to a variety of Moroccan destinations and now easyJet is flying to Geneva. Coming this winter Sterling will be connecting Brussels to Copenhagen, Stockholm and Oslo.

The airport even has its own Low Fare brochure highlighting the cheapest available fares in various price ranges. The only routes listed in the cheapest category (less than €48 one-way, including taxes) are the four SkyEurope destinations (all from just €19), easyJet to Geneva (from €32.99) and, maybe surprisingly, not-so-low-cost bmi to London Heathrow (from €42).

The newly-created ‘all-things-to-all-people’ carrier, Brussels Airlines, has around a 40% share of both airport capacity and frequency. In capacity terms Lufthansa comes a distant second, with the flag carriers of Spain, the UK and Italy taking the next three places. No LCC has a significant market share as yet.

The top 10 European destinations combined grew by less than 1% in 2006, not helped by a 6% decline in London traffic as the high-speed Eurostar made further inroads into the air travel market. Despite this, London remained the number one destination. Seven of the top 10 markets grew with Frankfurt, Lisbon, Milan and Vienna all growing by more than 5%. However, there were also declines in traffic to Barcelona and Antalya among the top 10.

When Ryanair selected Brussels Charleroi as its first base in mainland Europe few people were probably even aware that the airport existed. Since starting with seven routes in the summer of 2001, Ryanair’s network has expanded to some 20 destinations and the airport’s traffic reached a record 2.16 million passengers in 2006.A passenger survey conducted in 2006 revealed that 38% of passengers were from Belgium, and 20% from the Netherlands. This 58% represents the outbound market from the airport. Of the remaining 42% who are inbound passengers Italy leads with 10%, followed by France with 7% and Ireland with 6%.

Just over half of all passengers surveyed were using the airport for the first time, suggesting potential for further growth. Apart from Ryanair’s extensive network there are also low-cost services provided by:

Antwerp – a diamond route to the UK

Antwerp airport offers only one non-stop scheduled destination at present. VLM flies to London City 33 times per week with its Fokker 50s and offers onward connections to Manchester, Jersey and the Isle Of Man. Total scheduled passenger traffic in the last few years has hovered around the 80,000 mark on this one route.

Antwerp’s history as the centre of the diamond industry helps explain the existence of this one scheduled route straight into the heart of London’s business community.

Ostend & Liege – focus on cargo, but charter programmes are growing 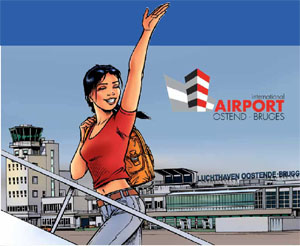 Both of these airports have dabbled with scheduled services, though both currently focus more on cargo and charter flights. Ostend was served by Ryanair from London Stansted with daily flights from 1 May 2003 until 14 January 2004. However, a charter programme remains and in 2006 passenger numbers grew 16% to 146,355. The addition of Bodrum, Djerba and Izmir brought the number of available destinations to 11 and this summer that should increase to 13 as JetAir adds new routes and additional frequency on existing routes.

Liege ranked in the European Top 10 for cargo traffic in 2006 with around 400,000 tonnes of freight. The opening of a new passenger terminal in March 2005 has also helped attract a growing number of charter carriers and routes. In 2006 the terminal handled around 300,000 passengers, up 25% on the previous year. However, traffic is very peaky with around half the passenger numbers occurring during the holiday months of July and August.