As Emirates, Qatar Airways and Etihad continue to plan for major expansion, anna.aero has examined their existing route networks to see how much competition there is between these three key players in the Middle East.

Following the recent Paris Air Show, Emirates and Qatar Airways have orders and options that would treble the size of their existing fleets, while Etihad’s order book will more than double the size of the airline.

Network coverage:big and getting bigger

Using published schedule data, anna.aero has compiled a downloadable spreadsheet listing the destinations served and the weekly frequencies from each of the three airlines’ major hubs in Dubai (Emirates), Doha (Qatar Airways) and Abu Dhabi (Etihad).

Emirates, as the most established of the carriers, offers the most destinations with 82, but Qatar Airways is not far behind with 73 despite having only just over half as many aircraft. Etihad, which started flying in November 2003, has a fleet quarter the size of Emirates’ but still manages to serve half as many destinations, typically at lower frequencies.

The number of routes on which all three carriers compete has now reached 34. Etihad thus faces intense competition for connecting traffic on more than 80% of its routes, with a monopoly on only three routes – Brussels, Dublin and Toronto. Qatar Airways has 13 ‘monopoly’ routes, while Emirates has 21, of which the triple-daily service to Auckland has the highest frequency.

Of the 100 destinations served by the three carriers combined, London Heathrow has the most frequencies with 70 weekly services. Regional destinations Bahrain (68) and Kuwait (60) have the next highest combined frequency, but these are likely to be more point-to-point routes.

If we treat Dubai, Doha and Abu Dhabi as interchangeable regional hubs (they are only around 250km apart) then a summary of the competition each carrier faces shows the difficulty of being the last of the carriers to enter this market place:

Etihad faces competition from both of the other carriers on 83% of its route network, whereas for Emirates the figure is just 41%. Where all three carriers do compete, Emirates invariably has the highest frequency though there are exceptions. Qatar has most flights to Bahrain and Kuwait, and Etihad has most flights to Dammam, Islamabad and Lahore. 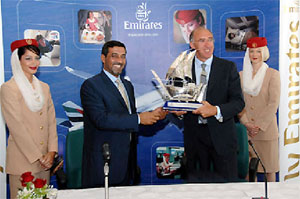 Emirates has most recently started serving Venice, its third destination in Italy following Rome and Milan. The route will initially be served five times per week using an A330-200, increasing to daily from 1 September. Neither Qatar nor Etihad serves Venice, though Qatar Airways does serve Milan and Rome at lower frequency than Emirates.

Venice is the first of five new destinations the airline plans to add this year. The next will be Newcastle in the UK, which receives daily service from 1 September, followed by Sao Paulo (1 October), Toronto (29 October) and Houston (3 December). The Houston route at 17 hours non-stop will be the airline’s longest. 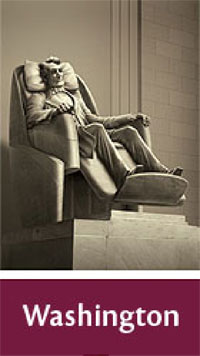 The first services to the US began recently when services to New York Newark got under way on 26 June. The route operates via Geneva, another new Qatar Airways destination. To celebrate the launch, a gala dinner was held in New York, with Diana Ross performing. This seemed to rather trump Emirates, which had Russell Watson on hand to sing at the launch of its Venice service.

On 19 July, daily non-stop flights commence to Washington Dulles. Qatar Airways will thus become the first Middle Eastern airline to fly direct to the US capital. Until now, only New York has been served by these carriers. A ninth new route for 2007 will be Stockholm, which starts at the end of November.

Dublin is the latest destination in Etihad’s rapidly expanding network. Four times weekly flights began at the start of July, a month earlier than originally envisaged. Neither Emirates nor Qatar Airways currently flies to Ireland.

Non-stop flights to Toronto commenced recently, having previously operated via Brussels. Both of these destinations are also currently not operated by their regional rivals. Before the end of the year, Brisbane will also be added to the network with three flights per week. Emirates already operates daily on this route.

Etihad is keen to increase the number of destinations it serves in India, but the current air services agreement between the countries limits it to just four destinations at present. It also wants to operate to Shanghai in China. Both Emirates and Qatar Airways already serve Beijing and Shanghai and these markets are believed to have major potential for growth.

As part of the marketing battle between the airlines, both Emirates and Etihad have been involved as sponsors of Formula 1 Grand Prix teams. Emirates was associated in 2006 with the now rejuvenated, championship-leading McLaren team, while Etihad is a recent sponsor of the less competitive Spyker team.

Emirates has long been associated with various sporting activities, from sponsoring cricket umpires to having the naming rights for Arsenal’s new football stadium in London, to sponsoring the New Zealand team in their recent (unsuccessful) attempt to win yachting’s most glamorous prize, the America’s Cup.

anna.aero will continue to monitor and report on the keen competition between these carriers and look in more detail at particular regional competition in the coming months.