Until recently France has been a low-cost carrier-free zone with plenty of low cost activity to and from France, but no airline of its own – until Transavia. In fact Transavia is a well-known Dutch brand, basically KLM’s low-cost operation, out of which last year KLM/Air France created a further subsidiary 60% owned by Air France, which recently started operating from Paris Orly with four 737-800s. 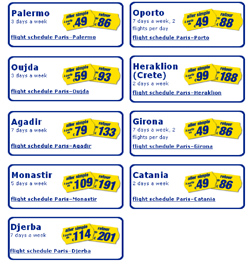 The majority of destinations are to North Africa and the Mediterranean though flights began back in May with a double-daily service to Porto in Portugal.

The complete network consists of 10 routes to six different countries primarily catering to outbound French holidaymakers. Morocco has become a popular destination for LCCs since it signed an ‘open-skies’ agreement with the EU, but Tunisia is something of a newcomer amongst scheduled LCCs though Air Berlin has served Djerba and Monastir for a number of years but primarily in its charter mode.

The choice of Girona (near Barcelona) is interesting as Air France already serves Barcelona with 62 flights per week from Paris CDG. At Orly both Iberia (56 flights per week) and easyJet (daily flights) serve Barcelona and Ryanair operates three flights per day from Girona to Paris Beauvais.

The normally difficult challenge of acquiring slots at Paris Orly was helped by Air France ‘donating’ slots that it has given up on the Orly-Strasbourg route following the introduction of a more competitive high-speed rail service. Air France has so far dropped frequencies from 12 to just eight flights per day on this monopoly route on which Air France carried over a million passengers in 2006. In a typically audacious move Air France will be claiming new entrant status for the airline this winter and thus try and pick up additional slots.

Schedule analysis – Air France still has a lot to learn

An analysis of the flight schedules indicates that Air France is yet to master some of the operational aspects of genuine low-cost flying. Although three of the four aircraft depart Orly before 07:00, only one returns after 22:00 while aircraft four appears to have afternoons off. Some of the generous turnaround times at Orly may be tightened as the airline manipulates and expands its slot holdings.