What may have seemed like the proverbial ‘white elephant’ 20 years ago has in the last two years turned into a major success as traffic at London’s most central airport has soared to well over two million passengers. It may have got off to a slow start as the nearby Canary Wharf complex initially failed to attract many business clients, but this privately-owned airport has benefited in recent years from London regaining its place as the financial centre of the world. In addition, improved access links and certification for new aircraft types has opened the airport up to a wider market.

After coming through a period of traffic stagnation, post ‘9/11′ traffic has surged in recent years thanks to a number of new carriers and new routes.

This recent success enabled Dermot Desmond, the Irish businessman who bought the airport from its builders Mowlem in 1995 for a modest £23.5 million, to sell it in 2006 for an estimated £750 million, which represents an annual rate of return of some 37%. The new owners, a consortium consisting of AIG, GE Insurance and Credit Suisse clearly want this growth to continue and the early signs in 2007 are good.

Traffic growth in 2007 is currently averaging nearly 20% thanks to new routes and carriers, but also possibly due to the extreme security measures in place at all UK airports, which have made Heathrow in particular a time-consuming airport to use. For time-sensitive business travellers London City is rapidly becoming more appealing.

BA recently sold off its regional BA Connect operations to Flybe, with one exception. It kept the London City operations and decided to rebrand them as BA CityFlyer, a name previously associated with one of its Gatwick-based subsidiaries.

Air France through its Dublin-based subsidiary CityJet has grown its network at LCY significantly this summer. A more detailed table showing the new routes and airlines operating to LCY is shown below:

The airport’s website is currently asking viewers to comment on which of the following possible new routes they would most like to see from the airport. They are Barcelona, Berlin, Helsinki or Vienna. The current top destinations are Edinburgh, Zurich and Amsterdam.

Zurich (+31%) and Amsterdam (+42%) generated the most additional traffic in 2006, but all routes with the exception of Geneva showed traffic growth. However, not all routes are successful. VLM ceased operating to Liverpool at the end of June 2007 claiming that the route was uneconomic, while services to Bremen operated by OLT ended in 2006.

A combination of four-engined BAe 146s (and its successors) and turboprops are the main aircraft types providing services due to the runway length of just 1,199m. However, the Airbus A318 was recently approved for operations and it seems likely that most of the Embraer jet range could operate into the airport as well. Apparently, a local newspaper misheard the Airbus news and reported that the A380 had been approved for London City operations. No wonder the locals were worried!

Apart from aircraft type restrictions, the airport also has environmental restrictions meaning that operations are limited from 05:30 to 21:30 during weekdays and there are no flights at all between Saturday lunchtime and Sunday lunchtime. In fact, the first weekday departure is not until 06:50 (to Geneva) and the first arrival is also at 06:50 (from Paris). 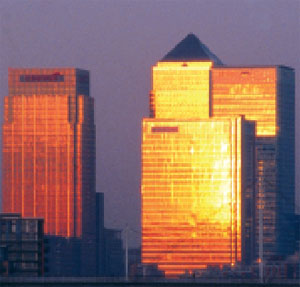 The UK CAA undertook an extensive passenger survey in 2003, which revealed the following facts at that time about the airport’s users:

The extension of the Docklands Light Railway right up to the airport should reduce the proportion of taxi/minicab users. Canary Wharf is only 14 minutes away and Bank station, which connects with the rest of the London Underground system is just 22 minutes away.