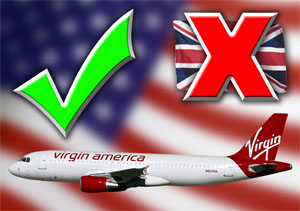 After a long, controversial and often acrimonious process, the US Department of Transport (DOT) has finally given Virgin America the green light to begin operations. On 19 July, tickets finally went on sale for the airline’s first routes, which begin on 8 August 2007.

The behind the scenes negotiations would no doubt make for a great TV drama with various groups accusing the airline of being unduly influenced by the UK’s Virgin Group and thus breaking US regulations regarding airline ownership. As part of the DOT’s ruling, American CEO Fred Reid will only be allowed to remain as the airline’s boss for a limited period as the DOT perceived that he was too heavily influence by Virgin in the UK.

Virgin America has so far released details of six routes it will be operating.

Four of these routes are from its San Francisco base with two others from Los Angeles.

The 2,500 mile transcon route from San Francisco to New York JFK will see Virgin America compete head-to-head with American, Delta and United. In addition, United and Continental operate from Newark to San Francisco and JetBlue flies from JFK to Oakland (OAK). Analysis of this market in 2006 showed that United was the market leader.

Ignoring secondary airports around Los Angeles and San Francisco, the route between SFO and Los Angeles International Airport (LAX) is dominated by United Airlines, which in 2006 had nearly two-thirds of the market. For the first half of last year average one-way fares were between $155 and $160.

The fourth quarter year-on-year fare reduction of 30% (from $144 to $102) resulted in demand increasing by 51% from 189,000 to 287,000 passengers. Virgin America is advertising one-way fares from as little as $44 (plus fees and taxes) so it will be interesting to see what further stimulation will be achieved.

Average fares between these cities in 2006 were between $115 and $130 depending on the time of year.

So what’s different about Virgin America?

Virgin America’s marketing highlights a few features that it believes will give it a competitive edge. It will be the first US airline with mood lighting that varies by time of day. There will be sockets to connect to 110v power at every seat and you will be able to order fresh food when you want it from the 9-inch screen at your seat. The IFE will also offer 25 pay-per-view Hollywood movies on demand. With only 118 seats on its A319s (compared with easyJet’s 156) and 146 on its A320s (compared to Wizz Air’s 180), the airline is positioning itself as a quality airline with exceptional customer service.