The fast-growing Spanish LCC this week began operating on four more new routes from its Barcelona base. Double-daily domestic flights to Granada began on 1 August, as did daily flights to Edinburgh and Jerez and twice-weekly flights to Tunis.

Competition on the Edinburgh route will be provided by FlyGlobespan, which also operates daily during the summer. In 2006, traffic between Barcelona and Edinburgh increased 35% to 68,000 passengers.

Air India became the first Indian airline to offer non-stop service to the US when it started daily flights to New York JFK from Mumbai on 1 August. The airline is using a B777-200LR, which will be branded in the new corporate colours reflecting the recent merger of the ‘old’ Air India with Indian Airlines.

In the last couple of weeks easyJet has announced a total of 18 new routes. Broken down by base the new routes are:

New routes that do not involve existing bases are Bournemouth-Krakow, Lyon-Barcelona and Nice-Brussels. Start dates for these routes are between October and December. New destinations not previously served by easyJet are Bari, Funchal (Madeira), Gdansk and Innsbruck.

Arch rival Ryanair already flies to Bari (from London Stansted, Frankfurt Hahn and Milan Bergamo from 13 December) and Gdansk (from Stansted, Hahn and Dublin), but does not operate to either Innsbruck or Funchal. The Milan-Bari route is suddenly getting really competitive, as MyAir has been operating low-cost flights from Milan Bergamo since February 2005. From mid-December there will now be three LCCs on the city-pair.

Cimber Air serves up a new route to Berlin 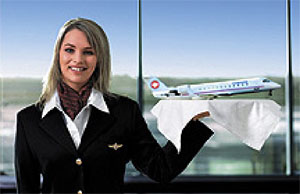 Danish regional carrier Cimber Air started daily operations between Billund (BLL) and Berlin Tegel (TXL) on 1 August. The 65-minute sector will be flown with one of the airline’s 50-seat CRJ200s. Billund is not currently connected with Berlin. One-way fares start from DKK395.

In 2006, traffic at Billund airport was down 5% at 1.88 million. However, the latest figures for July 2007 show traffic up 19.2% thanks to growth of 44% in the international scheduled market. Traffic for the first seven months of 2007 is also up 15% thanks to new routes with Ryanair to Dublin, Pisa and Madrid.

A route to Frankfurt Hahn which started on the 7 November last year ended just nine weeks later on 9 January. In that time 2,681 passengers had travelled on the 27 rotations operated (Source: destatis), resulting in an average load factor of just 26%. Even allowing for seasonality, it seems the route showed little sign of long-term viability. Undaunted, Ryanair will be adding new routes to London Stansted and Barcelona Girona later in the year and Milan Bergamo early in 2008.