From mid-December, Belfast International (BFS) airport becomes the latest base for Aer Lingus. This marks the first time the Irish flag carrier has set up a base outside Ireland. By the end of February, the airline will have three A320s based at the airport, operating to eight destinations. 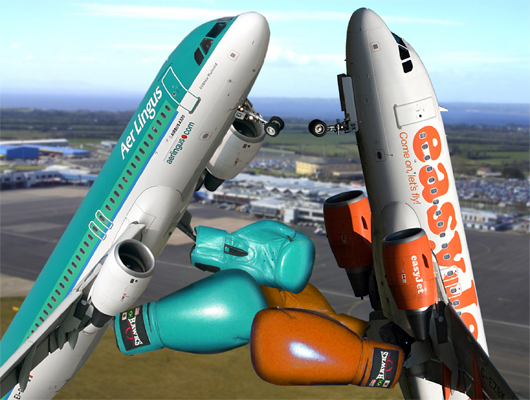 The most significant route announced was a triple daily service to London Heathrow, starting on 14 January 2008. Currently, easyJet serves Stansted, Gatwick and Luton from BFS, but Belfast passengers wishing to connect at Heathrow have to fly with bmi from Belfast City (BHD) airport. This new Heathrow service will operate as a codeshare with British Airways. Until recently, Aer Lingus was a fellow member of the oneworld alliance with British Airways.

To find slots at Heathrow for this service Aer Lingus has chosen to drop its Shannon service to Heathrow. During the winter season Aer Lingus operates 20 flights per day from Heathrow – 13 to Dublin, four to Cork and three to Shannon. The Belfast route will simply replace the Shannon route. Turnaround times at Heathrow are scheduled for 55 minutes. Traffic between Shannon and the UK has grown significantly in the last two years.

Between 2000 and 2004 traffic had been relatively stagnant. In 2004, Ryanair moved some capacity from London Stansted to Glasgow Prestwick, which increased the share of non-London passengers. Sensing an opportunity, easyJet began London Gatwick to Shannon services in January 2005. Ryanair responded by also starting both Gatwick and Luton services to Shannon in May 2005 and also increased frequency from Stansted.

easyJet pulled off the Gatwick route at the end of the summer 2006 season and Ryanair dropped the daily Luton service (though it re-starts again this winter), leaving the non-Heathrow London market to Ryanair. Meanwhile, traffic from Shannon to UK regional airports saw dramatic growth from just over 50,000 in 2002 to over 400,000 in 2006. This has been achieved primarily by Ryanair’s daily services to:

An additional daily service to Birmingham begins this November. A quick snapshot of fares for imminent travel from Shannon to London shows the competition Ryanair is providing.

Aer Lingus’ fares to Heathrow are comparable with Ryanair’s Gatwick fares, but cannot compete with Ryanair’s average daily fares to London Stansted. Aer Lingus may be carrying over 300,000 passengers per year on this route, but if it were really profitable it is unlikely they would be dropping it. Instead they could have found the necessary slots for the Belfast operation by removing a single frequency on each of the Dublin, Cork and Shannon services.

Of the remaining seven destinations planned by Aer Lingus from BFS five will involve head-to-head competition with easyJet. The new routes, planned frequencies, traffic in 2006 and competitors are shown below:

The arrival of Aer Lingus at BFS is just the latest exciting development in Belfast. Last month Ryanair announced it would start three domestic routes from BHD in late October to Liverpool, East Midlands and Glasgow Prestwick, and jet2.com has increased the number of destinations served from BFS this summer from six to 11 with the addition of new routes to Ibiza, Malaga, Milan Bergamo, Palma and Toulouse. From Belfast City, Flybe has added new routes this summer to Cardiff, Newquay and Rennes, having started services to Doncaster/Sheffield, Galway and Inverness at the end of 2006.