Since joining the EU on 1 January 2007 Romania has rapidly seen the benefits, at least as far as air travel is concerned, now that access to the Romanian market is fully liberalised. With a population of more than 21 million, but the EU’s lowest GDP per person (except for Bulgaria), air travel in Romania is likely to see rapid growth for a number of years.

This summer, the growth in low-cost carrier activity at Bucharest Baneasa looks likely to make it Romania’s second busiest airport in 2007, though the closure of the airport for three months between May and August for major runway repairs might prevent this. 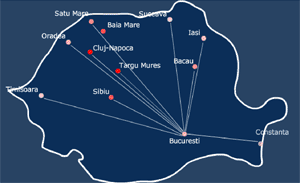 National carrier Tarom and independent regional Carpatair share over 90% of the Romanian domestic market. Tarom has nearly two-thirds of domestic flights with Cluj-Napoca and Timisoara accounting for half of its domestic capacity. Its nine domestic routes are operated by a fleet of 48-seat ATR 42-500s.

The international market is around five times larger than the domestic market in terms of capacity. Routes to Italy and Germany account for around 40% of international capacity.

Lufthansa is the dominant carrier in the German market with over 50% of capacity. The only LCC routes currently operated are by Germanwings from Cologne/Bonn (CGN) to Bucharest OTP, Blue Air from CGN to Bucharest BBU and Wizz Air from Dortmund to BBU.

According to AEA statistics, Tarom carried 1.28 million passengers in 2006, an increase of 7.7% on the previous year. Average load factor also increased from 61% in 2005 to 62.3% in 2006. In the first six months of 2007 the airline has grown by nearly 30% (see this week’s trendwatch) with the addition of several new 113-seat Airbus A318s, which operate on mid-length routes such as Brussels, Frankfurt, Munich and Tel Aviv.

New destinations this summer include Valencia (from Bucharest), and Madrid and Bologna from Cluj Napoca.

So far, it is concentrating internationally on the key Italian and German markets from its base at Timisoara. However, it also operates to Paris (currently suspended for ‘operational reasons’), Athens and Budapest as well as Lviv (Ukraine) and Chisinau (Moldova).

The airline only began services in 1999 with one leased aircraft, just 10 employees and one route from Cluj to Venice Treviso. The airline now has 16 aircraft and reported a profit of €1 million in 2006.

According to ERAA statistics, Carpatair’s traffic in the first four months of 2007 is up 28.7% to 152,000. RPKs have increased faster than ASKs resulting in a load factor of almost 60%.

Since its first flight in December 2004, local low-cost airline Blue Air has grown rapidly and carried 443,000 passengers in 2006, achieving revenues of around €50 million. It operates a fleet of four B737s, all with slightly different seating configurations (123 seats, 136 seats, 144 seats and 167 seats), from its base at Bucharest Baneasa airport.

A range of destinations are served at frequencies ranging between daily and weekly. The newest destinations to be served are Stuttgart and London Stansted. Anna.aero will look at Blue Air’s Bucharest operation in more detail in an upcoming base analysis.

In addition to Romania’s own airlines, a growing number of foreign carriers have shown an interest in developing bases in Romania. Italy’s MyAir has stationed an A320 at Bucharest BBU this summer to support its route network, which now consists of 10 destinations – Milan Bergamo, Venice, Bologna, Bari, Barcelona, Paris CDG, Catania, Milan Malpensa, Naples and Rome Ciampino.

Wizz Air to put second A320 in BBU

Wizz Air first started flights from Bucharest BBU on 15 January this year when it launched services to Barcelona, Budapest, Dortmund, London Luton and Rome Ciampino. In June, the airline established its first Romanian-based aircraft and a second aircraft will be added in February 2008. By then, further routes to Liverpool, Parma, Valencia and Venice Treviso will have been added. Currently, Rome and London have the highest frequency with daily services.

Apart from Bucharest services Wizz Air also operates from Targu Mures in Transylvania to Barcelona, Budapest, Rome and from October London Luton. All routes are flown with 180-seat A320s.

easyJet is coming, but where’s Ryanair?

easyJet recently announced its first routes to Romania with services from Bucharest BBU to London Gatwick (daily from 29 October), Madrid (four per week from 29 October) and Milan Malpensa (daily from 10 September). Currently conspicuous by its absence is Ryanair, though this seems unlikely to remain the case for long.