SkyEurope continues to make major inroads into the Austrian market this winter as it trebles its presence from two aircraft this summer to six this winter. The Bratislava-based airline only began operations at Vienna at the start of the summer season, with two B737 aircraft managing to serve 16 destinations. 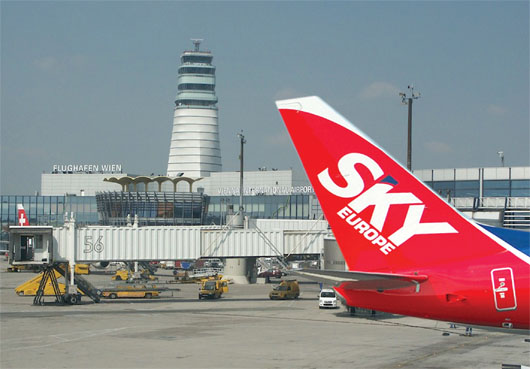 Fare data for all routes from Vienna for a week in August was analysed to identify which routes might be performing best. Taxes and fees are included in these figures.

The average sector length is around 900 kilometres, with Larnaca in Cyprus the most distant destination. Average fares for the week were over €200, though average fares fell from €323 for flights on Monday to just €137 for flights booked five days later on Saturday. Amsterdam and Bucharest fares were particularly high, suggesting good demand, while Venice Treviso’s average fare for the week was high given the relatively short sector length.

For the coming winter season, the airline is ramping up operations from two to six aircraft. This will enable 19 destinations to be served, several on a double-daily basis to appeal to business passengers. Five ‘summer sun’ destinations will be dropped (Dubrovnik, Pisa, Rimini, Split and Zadar), with eight new destinations added – Copenhagen, Innsbruck (double-daily), Krakow, Lisbon, Milan Bergamo, Naples, Timisoara and Warsaw.

There appears to be some aircraft time still unallocated, suggesting that the airline may be announcing further new routes in the coming weeks. Rome would appear to be a good candidate given that SkyEurope already serves it from several of its other bases.

Home carrier Austrian Airlines remains dominant at Vienna airport with nearly 60% of passengers; low-cost carriers have gradually been making an impression with around 13% of traffic in 2006. Of the 19 routes currently on sale for winter, Austrian Airlines competes directly with SkyEurope on 18 of them.

Only Lisbon is not served by Austrian. The long sector length of over 2,300 kilometres means that SkyEurope operates this as a night-flight, departing Vienna at 21:30 and returning at 06:00. This means the departure time from Lisbon is at 01:30 in the morning. A similar schedule is applied to the Larnaca route during winter.