If proof were needed that the low-cost carrier phenomenon is truly global then the emergence of not one, but two, such carriers in Saudi Arabia is surely the final evidence required. Nas Air and Sama both began flying commercially earlier this year, initially on domestic routes. While Nas Air is based at Riyadh, Sama is based at Saudi Arabia’s third biggest airport of Dammam.

Traffic at Jeddah and Riyadh has been growing steadily for the past decade, though Dammam’s traffic has been virtually flat between 1992 and 2003. However, in the last three years growth has averaged over 8% per annum.

To establish Sama a UK-based consultancy called Mango, consisting of several former Go and easyJet senior managers, was drafted in to set up the airline and work with the Saudi government in embarking on the process of liberalisation in the domestic market. Despite having to base its current fleet of four B737-300s at Dammam, the airline manages to operate several routes out of Riyadh through clever scheduling.

The nine currently operated routes linking six cities are all served at least daily. Morning departures from Dammam are staggered at 15 minute intervals with no aircraft departing before 07:30. A total of 30 sectors are flown each day by the four aircraft with only one aircraft returning to Dammam before midnight. Two of the aircraft do not return until after 02:00 in the morning. 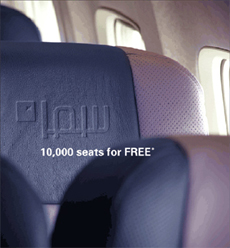 All of Sama’s existing route network is already served by Saudia, though demand in 2006 varied between nearly 2.5 million on the Jeddah – Riyadh trunk route and just 32,000 on the Dammam – Gizan route. However, six of the nine routes had markets of over 300,000 annual passengers proving the presence of existing demand.

With lower fares and more attention on customer service, Sama will be hoping to significantly stimulate these existing markets as well as luring away some passengers from Saudia.

As part of the airline’s initial marketing campaign it gave away 10,000 ‘free’ seats. All these seats were sold in less than 24 hours. According to the airline’s own research the most important factors when selecting a flight were ‘Price of Ticket’ (78%) and ‘Reliability/On-time schedule’ (68%). 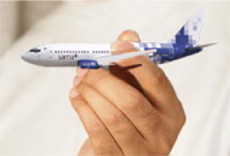 The airline’s business plan assumes fleet growth to 35 aircraft by 2010. Some of these aircraft will be needed to operate Public Service Obligation (PSO) routes which are being redeployed from Saudia to the newly licensed carriers. Furthermore, these routes have to be flown without public subsidy.

International routes are also likely to feature fairly soon depending on the various bilaterals with neighbouring countries.