Stuttgart: Germany’s motown on the move once more

Stuttgart is famous for many things – the home of Mercedes-Benz, Porsche, the current German football champions and Germany’s oldest TV tower. Its airport ranks as the fifth largest in Germany with just over 10 million passengers in 2006, and the imminent opening of a major exhibition centre right next to the airport is likely to benefit the airport.

Located about half-way between Lufthansa’s two major bases at Frankfurt and Munich the airport has benefited in recent years from its relationship with low-cost airlines.

Both Germanwings and Hapag-Lloyd Express (hlx) established bases at the airport in the second half of 2003 which helped the airport recover from the post-‘9/11′ slump in traffic. Between 2002 and 2006 traffic grew by almost 40%, though the airport is forecasting a modest 3% growth in 2007 partly as a result of TUI reducing its winter hub operations at the airport. The growth in LCCs has contributed to the charter market falling by 50% from two million in 2000 to just over one million in 2006.

Domestic traffic is reasonably stable year-round and represents around 40% of traffic in the winter months. During the summer it falls to less than 30% as seasonal holiday traffic plays a major role at the airport.

German carriers dominate at the airport with no foreign carrier having more than 3% of the market. Germanwings has now overtaken Lufthansa as the airport’s largest airline in terms of passengers though the merging of hlx and hapagfly into TUIfly.com may make them the biggest carrier in 2007. Air Berlin has a relatively small presence though its acquisition of dba will give it an estimated market share of 8% in 2007.

Based on the airport’s definition of low-cost carriers around 36% of Stuttgart’s traffic in 2006 was provided by LCCs, all of which were German with the exception of SkyEurope’s five times weekly service to Bratislava. Romania’s Blue Air will shortly be starting LCC flights from Bucharest and Arad to Stuttgart and Flybe recently took over BA’s Birmingham services.

Neither easyJet nor Ryanair serves Stuttgart, though Ryanair currently operates from Karlsruhe/Baden-Baden (FKB) to four destinations – London Stansted, Dublin, Rome Ciampino and Barcelona Girona. FKB is located around 80 kilometres west of Stuttgart and Ryanair will add routes to Alicante, Stockholm Skavsta and Valencia this winter. Routes to Pisa and Marseille were abandoned earlier this year.

Air Berlin also operates from FKB to Berlin Tegel (three flights per weekday) and Hamburg (two flights per day) as well as a weekly flight to Rimini. 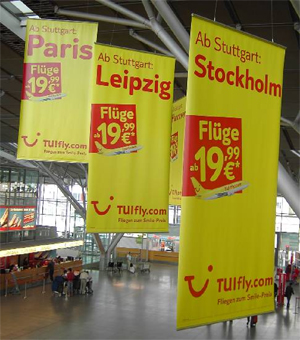 At Stuttgart the routes to Berlin and Hamburg are the busiest with one in every six passengers travelling on one or other of these routes. Palma ranks as the number one international route ahead of the major cities of London and Paris. Two Turkish destinations, Antalya and Istanbul, also make it into the Top 10. Air Berlin has recently started flights to Vienna which ranks seventh overall. See this week’s farewatch for more information on this particular route.

While domestic traffic plays a key role the busiest foreign destinations are to popular German holiday destinations – Spain, Turkey and Italy. Central European countries like Poland, Hungary and Romania do not feature strongly amongst the leading country destinations.