It’s been a memorable week for California’s air travellers. The return of Southwest to the San Francisco market, the launch of Virgin America’s transcontinental service from Los Angeles to New York JFK, and the start of all-business transatlantic services from Los Angeles to London Stansted with MAXjet makes it a more significant week than usual.

The return of low-cost pioneer Southwest is probably the most significant event, representing as it does only the 64th destination on Southwest’s network. Initially, the airline will operate to just three destinations: 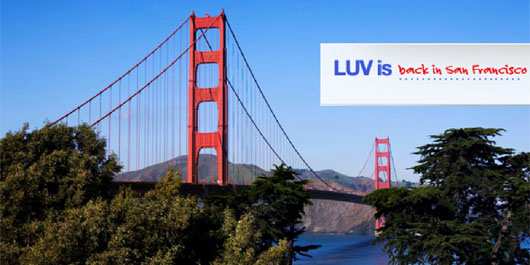 During Q4 2006, the 337km route had an average fare of $102 with United having the leading market share of 62%. However, Frontier Airlines with 11% of the market offered the lowest average fares at $78. Frontier only entered the market as recently as June 2006 with five flights per day, but pulled out of the market on 10 July this year.

Southwest is celebrating the 40th anniversary of the so-called ‘summer of love’ in San Francisco with special offers, sponsored hire cars and a variety of parties and events.

America’s latest high-profile newcomer finally took to the skies on 8 August from its main base in San Francisco, with services to New York JFK. Double-daily flights to JFK will begin from Los Angeles this week, increasing to three times daily from mid-September. For 2006, the market leader and cheapest airline in each quarter on this 2,500 mile route is shown below:

Among US domestic routes of more than 2,400 miles, the route is consistently among the most expensive, suggesting that Virgin America is likely to find plenty of willing customers for its value fares.

MAXjet the all business class carrier based at London Stansted is gradually working its way across the US. Having started with flights to New York and Washington on the East Coast, the airline then ventured as far as Las Vegas. This week sees the start of services to Los Angeles on the West Coast. Flights will be operated four times weekly using a B767 with all seats having a 60-inch seat pitch.