In 2003, Dortmund airport handled just over one million passengers. Since then, thanks to the arrival of easyJet and other low-cost services, traffic has doubled to just over two million in 2006. This ranks Dortmund as Germany’s 13th busiest airport. With additional routes from Wizz and new services from Sterling starting in October traffic is likely to grow to around 2.5 million in 2008.

Four based aircraft, none of which stay out late

A look at easyJet’s schedule reveals that all routes from Dortmund are served by Dortmund-based aircraft. Although all four aircraft are under way by 07:00, none stay out later than 22:00, which is unusual for a low-cost base but reflects the stringent operational curfews in place at the airport.

Links to other bases dropped

The schedule was changed at the end of May when the underperforming Milan Malpensa route was finally dropped in favour of two new lower frequency routes to Edinburgh and Thessaloniki. This is easyJet’s only service to Thessaloniki from anywhere on its network. Another route to have been dropped is Paris, which was initially served double-daily. It was reduced to daily at the start of the winter 2005 season but was dropped completely at the end of the summer 2006 season. On the other hand the London Luton route has increased from double-daily to three times daily since the end of 2006.

easyJet load factors at Dortmund average around 80% from March to October, but fall to below 70% in January and November. Overall in 2006, Budapest, Alicante and Malaga achieved the highest average load factors of over 80%.

The three worst performing routes – Geneva (60%), Milan Malpensa (69%) and Paris CDG (74%) have now all been dropped. Only on Palma does easyJet face direct competition with Air Berlin feeding its Palma hub. In the first five months of 2007, the best routes in terms of load factor have been Budapest, Barcelona, Alicante and Krakow. The seasonal route to Nice has got off to a slow start this year.

No huge fares for imminent travel

A fares snapshot for travel in late August shows that fares are highest for Budapest, further confirming this as a strong route for easyJet. Malaga has the longest sector length by more than 200km but fares are only just above the base average.

Currently available fares for the last week in October show lots of cheap seats for 20 euros or less on flights to London Luton and Prague.

Germanwings and Wizz are main competitors

From 22 June this year, Germanwings has based an aircraft at Dortmund and flies to Vienna (double-daily), Palma, Istanbul, Faro and Ibiza. Routes to Munich, Split and Zagreb will be added for winter. Wizz Air has no based aircraft but currently flies to five destinations in Central Europe – Katowice, Warsaw, Gdansk, Bucharest and Wroclaw – with three more starting soon. Poznan (from October), Sofia (from October) and Tirgu Mures (from February 2008) will further strengthen Wizz’s position at the airport. 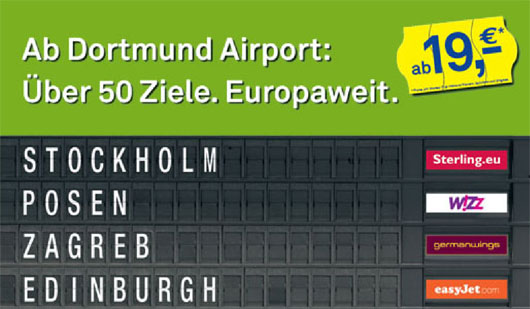