Despite this week’s incidents involving landing gear failure, which grounded a few older Q400s, the rise in fuel costs means that turboprops such as the Q400 and ATR 42/72 have made something of a comeback. 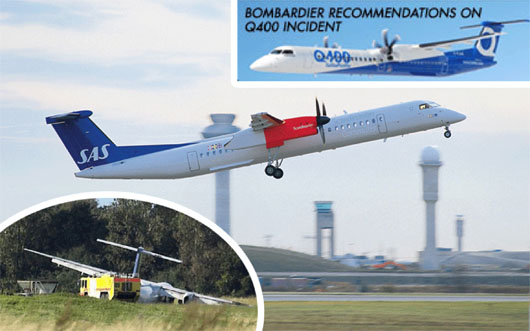 In addition Luxair now has two Q400s in service (operating to Munich and Paris CDG) with one more on order and three further options. All of these carriers have configured their aircraft with between 70 and 72 seats with the exception of Flybe who have 78 seats.

Flybe is the only airline to use the Q400 as part of a “low-cost” business model operating the aircraft on primarily short sectors where the aircraft’s lower maximum speed compared to a jet is less significant. Flybe already operates over 30 of the type with orders and options for 40 more. The aircraft suits the markets that Flybe serves, which are primarily from smaller regional airports.

The shortest sector is Flybe’s 38 kilometre flight between the Channel Islands of Guernsey and Jersey. Eleven routes (6% of total) are over 1,000 kilometres in length. Flybe was forced to cancel 34 flights on Thursday 13 September representing around 7% of all flights. Domestic routes from Norwich, Exeter and Manchester suffered most disruption. It expects normal service to be resumed by the weekend.