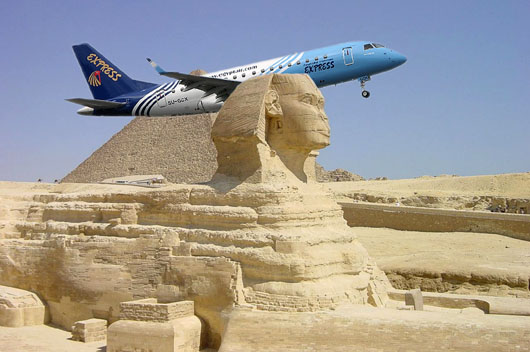 As Egypt prepares itself for increasing deregulation and liberalisation anna.aero takes a look at the current state of the market. By the end of this year, traffic at Egyptian airports will have doubled from 13.5 million passengers in 1997 to an estimated 27 million.

In November 1997, Egypt experienced a major terrorist attack when 62 tourists were killed at Luxor. Two months before that some German tourists had also died in an attack. This explains why traffic fell significantly in 1998 before rebounding back in 1999 and 2000. The after effects of ‘9/11′ put a dampener on tourism for a few years, but in 2004 traffic boomed once again with 25% growth, followed by two more years of consolidation.

Domestic passengers represent around 20% of Egyptian airport traffic in 2006 with just over five million passengers. Cairo accounts for around 40% of these.

In 1997, Cairo (CAI) had around 60% of all airport traffic in Egypt, but with the increase in tourism this has fallen to just over 40% in 2006. Much of the traffic outside Cairo is inbound tourism, though different nationalities have different preferences. For example, nearly 50% of UK traffic (around two million passengers in 2006) is to Sharm El-Sheikh, whereas 60% of German traffic (around 2.1 million passengers in 2006) is to Hurghada. These services are typically provided by charter carriers rather than scheduled airlines.

In 2006, traffic from three of Egypt’s leading tourist markets behaved in quite different ways. Traffic from the UK was up 25%, from Germany down 3% and from France it was down 25%.

Seasonality profiles of the three leading airports in 2006 shows a very similar profile for the tourist resorts of Sharm El-Sheikh and Hurghada.

Traffic is less seasonal than other holiday destinations thanks to Egypt’s good weather during the northern hemisphere’s winter months.

Egyptair has a virtual monopoly on the scheduled domestic market. The busiest domestic routes are between Cairo and Luxor, Sharm El-Sheikh, Hurghada and Aswan, plus the route between Aswan and Abu Simbel.

According to data from OAG for the week commencing 1 October 2007, Egyptair’s frequency and capacity share of scheduled international traffic is around 45%. The next largest carrier is Saudi Arabian Airlines with just under eight per cent of capacity and just over five per cent of frequencies. Cairo is served three times daily from Jeddah, and daily from Riyadh and Dammam. Emirates operates 10 flights per week from Dubai to Cairo and an additional daily service to Alexandria’s Borg El Arab airport (HBE).

As preparation for increased competition, government-owned EgyptAir has created a regional subsidiary EgyptAir Express, which started in June this year with three Embraer 170s operating in a single-class 76-seat configuration. These are currently used on domestic routes to improve frequencies and schedule quality. A total of six of the type have been ordered with options for six more.

The rest of EgyptAir’s fleet of 42 aircraft comprises a mix of 30 Airbus and eight Boeing aircraft and four all-cargo aircraft, with orders in place for an additional 10 B737-800s. In May this year the airline celebrated its 75th anniversary.

Scheduled traffic has grown steadily in each of the last two financial years.

The airline commented that terrorist attacks in Sharm El-Sheikh in July 2005 and at Dahab in April 2006, plus war in Lebanon during the second quarter of 2006 impacted overall performance. On a more positive note it is currently in negotiations with the Star Alliance about becoming a full member in the near future and recently signed a code-share agreement with Lufthansa.