On 29 January this year, Russia’s first low-cost carrier took to the skies from Moscow’s Vnukovo airport to the Black Sea resort of Sochi. The 91 passengers carried on that trip have grown to over 400,000 who have been served in the following eight months. The airline now operates six routes and has grown to seven aircraft. Established in 2006 by Boris and Alexander Abramovich (who are also owners of Kras Air) SkyExpress operates a fleet of B737s (a mix of -300s and -500s). The European Bank for Reconstruction and Development (EBRD) bought a 20% shareholding in December 2006 for $10 million.

This week sees the launch of the airline’s seventh route to Ekaterinburg. All destinations are served daily and this new route is no exception. By operating through the night with at least three aircraft the airline achieves high aircraft utilisation, even if turn times are typically between an hour and 90 minutes rather than the 25 to 40 minutes achieved by the leading LCCs globally.

The winter schedule appears to require only six aircraft to operate, but given the occasionally harsh winter weather the airline appears to be keeping one aircraft in reserve to help support operational integrity. 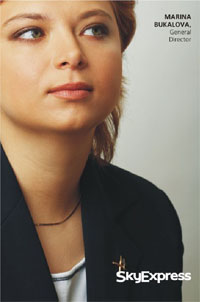 At the recent World Low Cost Airline Congress (WLCC) in London was only just beaten to the award of ‘Best Newcomer’ by Click Air. Ironically, SkyExpress has partnered with Click Air to sell seats on its recently introduced Barcelona to Moscow Domodedovo service.

Impressively, the airline’s website is available in English and features information on (and stylish photos of) the airline’s key management team. General director Marina Bukalova was previously commercial director at Kras Air and is one of four women in senior management positions. Other senior managers have experience from Domodedovo Airlines, AirUnion, Air Bridge Cargo and Transaero.

As part of its promotional activities SkyExpress was heavily involved in supporting Sochi’s successful bid for the Winter Olympics in 2014.