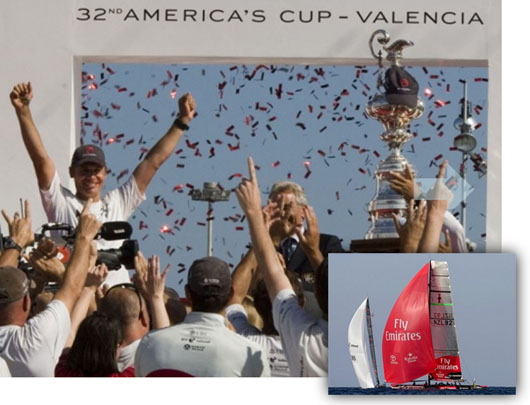 Thanks to events like the recent America’s Cup, the development of the architecturally mesmerising City of Arts and Sciences and the building of a Formula 1-standard race track, Valencia has rapidly been emerging as a major travel destination.

Passenger numbers at Valencia airport (VLC) have grown a phenomenal 150% since 1999 thanks to the rapid growth of low-cost carriers and an increasingly competitive Spanish domestic market. In fact, traffic doubled in just three years between 2002 and 2005 as Vueling, easyJet, Ryanair, Air Berlin and other LCCs made their presence felt.

Thanks no doubt in part to the 32nd America’s Cup competition, which ran from April to July, traffic in 2007 has been growing at around 20% per annum, making Valencia the fastest growing airport in Spain this year.

Seasonality is not quite as extreme as for some Spanish destinations, with traffic in the summer peak of August around 80% higher than in January’s off-peak month. Valencia is now on-course to handle more than six million passengers in 2007.

Iberia and its regional partner Air Nostrum have been the leading two airlines at VLC for many years, but despite growing passenger numbers their share of traffic has fallen from 47% in 2004 to just 38% in 2006.

Five LCCs are among the Top 10 airlines in 2006, with Ryanair leading the way. Despite only starting services to Valencia in November 2004 (from London Stansted), it carried nearly 600,000 passengers on seven routes in 2006.

Vueling began services in 2004, as did easyJet. Curiously, the first low-cost airline to start flights to the UK was Thomsonfly, which began services from Coventry in March 2004.

Ryanair: two based aircraft will increase destinations to 21

From the end of October, Ryanair will take the plunge and base two aircraft at the airport and use them to launch another 11 routes, including a domestic route to Santiago de Compostela. This will bring to 21 the number of destinations served by the Irish carrier. Each of the two based aircraft will operate three daily rotations with most routes served either three of four times per week. Only Paris Beauvais gets a daily service. These new services should help propel Ryanair to be the number one airline at Valencia in 2008.

Thanks to Spanish double world champion Fernando Alonso, Spain is likely to host two Grand Prix in 2008 with Valencia having been given a provisional date of 24th August, alongside the regular race at Barcelona. The race will not take place on the purpose built Ricardo Tormo circuit outside town (where F1 teams test regularly), but will be a Monaco-style harbour side race incorporating some of the infrastructure created for the America’s Cup. The sailing contest is scheduled to return to Valencia in 2009, but this is currently in doubt because of legal proceedings.