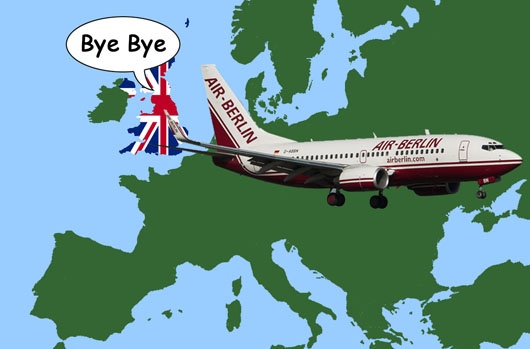 In late 2005 Air Berlin revealed plans to enter the UK domestic market with double-daily flights from London Stansted (STN) to Belfast City (BHD), Glasgow International (GLA) and Manchester (MAN). The Glasgow and Manchester services began on 16 December 2005 with the Belfast service starting on 2 May 2006. On the Glasgow route it competed directly with easyJet (and for a brief period FlyGlobespan), on Manchester with Eastern Airways (who quit the route in February 2006) and on Belfast City with easyJet’s services to Belfast International.

Now, less than two years since services began Air Berlin is pulling off all three routes, its attempt to create a mini-hub at Stansted to connect with its German flights apparently not a commercial success. The German flights will continue with a new double-daily service to Munich firing up on 5 November in direct competition with easyJet.

If Air Berlin were using its smallest aircraft, the 100-seat Fokker 100s then these figures would give excellent load factors but according to schedules the 144-seat 737-700s were intended to serve the routes most of the time. In that case an average of 80 passengers per flight would correspond to a load factor of around 55%, way below break-even for the airline.

Ryanair’s decision to start four-times daily services from Belfast City to London Stansted later this year may have triggered Air Berlin’s decision to look at the long-term strategic value and viability of these UK domestic routes. After confirming plans to withdraw from the Manchester route Eastern Airways announced it would be returning to the route.

On the Glasgow route Air Berlin came in against two incumbents, easyJet and FlyGlobespan though the latter quickly reduced frequency to daily, then to weekly and finally pulled off the route at the end of March 2006. The variations in demand on the route since 2004 are shown below.

Given all this competition and the difficulty of promoting a very German brand at UK regional airports it is maybe no surprise that the venture was not a success.

Seamless connections through STN to Germany

Unlike other LCCs, Air Berlin does offer ‘proper’ connections through Stansted without the need for passengers to reclaim their baggage and check-in again. This was a key component of wanting to offer UK regional passengers ‘seamless’ connections to Air Berlin’s seven German destinations of Berlin Tegel (TXL), Düsseldorf (DUS), Hannover (HAJ), Leipzig (LEJ), Munster/Osnabruck (FMO), Nuremberg (NUE) and Paderborn (PAD). The best out-bound connections were offered in the evening with returning passengers best served by early morning departures from Germany connecting back through Stansted onto the morning domestic flights.