Romania’s first and so far only homegrown LCC will celebrate its third anniversary in early December. Its base at Bucharest Baneasa (BBU) airport is the secondary airport serving Romania’s capital and its runway recently underwent some major works to prepare it for likely future LCC growth.

In 2006 the airline carried 443,000 passengers and achieved revenues of €50 million indicating average revenue per passenger of around €113. During 2007 the airline has grown its fleet to include four 737s whose configurations vary from 123 seats to 165 seats. Apart from routes from Bucharest there are also direct services from Romanian regional airports at Arad, Bacau and Cluj-Napoca. For the coming winter season the airline’s weekly frequencies on each route are shown below.

An unusual feature is that the airline serves two Turin airports. Turin Casselle (TRN) the main airport serving Turin and which handled 3.25 million passengers in 2006, is served twice weekly from Bucharest and Bacau. Turin Cuneo Olimpica (CUF) is around 60 kilometres from Turin and 20 kilometres from Cuneo and handled less than 10,000 passengers in 2005. The only other airline operating international services to Cuneo at present is Belle Air which operates to Tirana in Albania.

Apart from the scheduled network Blue Air also operates a charter programme mainly to Greek and Turkish destinations during the summer season.

Blue Air offers fares in three travel classes, what it calls ‘Low fare’, ‘Middle fare’ and ‘Flexi’. Each pricing point then appears to have name some of which are MiniBlue, SmartBlue, EasyBlue, ExpressBlue, Flexiblue, Skyblue, Starblue, Travelblue, Worldblue 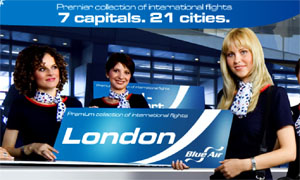 Recent reports indicated that Greek carrier Aegean Airlines was interested in acquiring a stake in the airline but these talks have now apparently collapsed. The airline is also believed to be looking to lease at least two more 737s. Since Romania joined the EU at the beginning of 2007 the low-cost market has expanded rapidly with easyJet, MyAir and Wizz air all developing new routes from the country.