All operators of Q400s will be feeling slightly anxious after the dramatic decision by SAS to axe the type from its fleet after a third incident involving undercarriage failure. Though Swiss regional carrier Flybaboo currently only operates a single example of the type it does constitute one third of its fleet. As a precaution the airline recently grounded the aircraft for four days to undertake detailed inspections. The other two aircraft are the smaller Q300s.

This weekend Flybaboo celebrates the fourth anniversary of its inaugural commercial flight between Geneva and Lugano. Since then the airline has grown cautiously, focusing on routes in France, Italy, Spain and Switzerland. For this winter Rome is added to the network with double-daily service to Fiumicino, competing head-to-head with Alitalia’s thrice-daily service. It will also have to contend with easyJet operating daily flights to nearby Rome Ciampino.

Saab turboprop aircraft operated by Darwin Airlines is based in Lugano. It flies to Geneva three times each weekday and is operated as a code-share. For this winter, two Geneva-based aircraft operate six scheduled routes to Florence, Naples, Nice, Rome, Valencia and Venice.

During the summer the airline also operated seasonal routes to Ajaccio and Figari on the island of Corsica, Biarritz and Marseille in France, Dubrovnik in Croatia, Olbia in Sardinia and Ibiza. A route to Prague (served by both Swiss and easyJet) proved less successful and was dropped.

To support its ambitious plans, the airline has ordered five Embraer 190s, the first of which will be delivered in May 2008 with two others being delivered before the end of 2008. Routes for the new aircraft have yet to be confirmed though London City is apparently being considered. 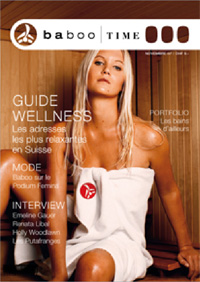 Flybaboo’s in-flight magazine, Baboo Time, was launched in May 2004 as a style magazine reporting on the latest trends and events in the Geneva area. Apparently there is enough material (and advertising) to fill 80 pages each month. Apart from being available on-board, the magazine can be bought at all good newsstands, and is available in restaurants and cafes. For those who wish to subscribe to this French-language magazine, an annual subscription of 10 issues costs CHF41 (€25).