Turkey’s hopes of joining the EU in the near future may be highly uncertain but its aviation market is booming as if it had already joined. Passenger traffic at its eight busiest airports grew by 27% in 2004 and 22% in 2005, and even last year’s more modest 8% growth is well above the global average.

The development of services from Istanbul’s secondary Sabiha Gökcen airport (SAW) helped take total Istanbul traffic to over 25 million for the first time in 2006. Its strategic position between Europe and Asia has helped propel passenger numbers to new heights. Meanwhile tourism has become increasingly important to the Turkish economy helping airports like Antalya, Bodrum, Dalaman and Izmir to become major leisure destinations.

Turkey has around 36 airports involved in scheduled flights according to OAG data for November 2007. Of these, the two Istanbul airports plus Ankara, Antalya and Izmir account for well over 80% of scheduled airline capacity.

There are some curious differences between the various leisure airports. For example, UK traffic represents over half of all traffic to/from Dalaman (DLM) whereas German traffic represents less than 10%. In contrast, Germans make up nearly a quarter of all traffic to Antalya whereas Brits constitute less than 3%. At Bodrum (BJV) Brits represent nearly 25% over four times more than Germans. These routes are currently dominated by the major charter carriers offering package holidays. 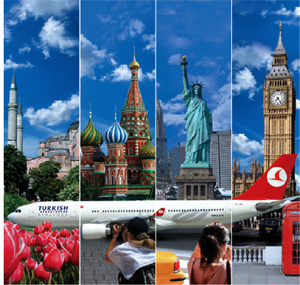 The Turkish domestic market has three main players. THY Turkish Airlines has around an 80% share while Atlasjet and Sunexpress each have around a 10% each. The top routes are nearly all from Istanbul. Weekly departures for the airlines on the top routes at the start of the winter season are shown below:

Atlasjet was founded in 2001 as a private airline and has now expanded to a fleet of some 15 aircraft. These include A319s, A320s, 757s and three CRJ900s. It operates scheduled domestic services and also a range of international charter services. In 2006 the airline carried 3.37 million passengers (up 24%) and reported a small profit.

THY Turkish Airlines is one of the fastest growing national airlines in Europe and has been consistently profitable in recent years. Passenger numbers grew by nearly 21% in 2006 and growth this year has averaged just over 15%.

In 2006 the airline transported almost 17 million passengers of which almost nine million were scheduled domestic passengers, seven and a half million were international scheduled passengers and the rest were charter passengers. The airline served a total of 134 destinations, a Ryanair-esque increase of 27 on the year before.

The airline has a mixed fleet of around 100 aircraft split evenly between Airbus and Boeing models. Most of its aircraft are in the 737/A320 size range but the airline also has five A330s and seven A340s suitable for longer-haul operations. Ten aircraft will be retired from the fleet in the next two years and 24 new aircraft added. In 2008 the average age of the fleet will be less than six years.

In 2008 the airline hopes to join the Star Alliance along with EgyptAir. This will give the alliance two major hubs on either side of the fast-growing Middle East region.

Low-cost carriers not yet a threat

With the Turkish market not fully liberalised and on the periphery of mainland Europe LCCs have not made much of an impact in the Turkish market. easyJet operates daily from London Luton to Istanbul SAW and Air Berlin flies from Düsseldorf to Istanbul daily. This winter TUIfly operates low frequency services from a variety of German airports to Antalya, Bodrum and Dalaman and Germanwings flies to Istanbul SAW from Berlin SXF, Cologne/Bonn, Dortmund and Stuttgart with two to four frequencies each week.