On 18 November, London Luton based Silverjet will become the first airline to operate an all-business class service on a non-transatlantic route when it launches its inaugural flight from London Luton to Dubai. Since starting operations earlier this year, the airline has been operating 100-seat 767s from Luton to New York Newark airport. 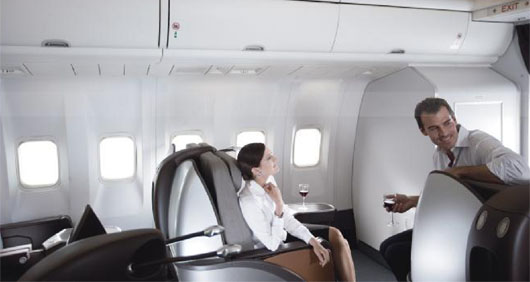 Silverjet is the newest (but unlikely to be the last) airline to aim for the all-business class market. Other airlines in this market include Maxjet, Eos and L’avion, though the first airline to offer this service was probably the less high-profile PrivatAir, a Geneva-based airline which operates Boeing Business Jets (BBJs) and Airbus A319s in a low-density configuration on behalf of other carriers. It currently flies three routes on behalf of Lufthansa (Düsseldorf – Newark, Munich – Chicago and Munich – Newark), KLM (Amsterdam – Houston) and Swiss (Zurich – Newark).

Since starting in October 2005, Eos has operated just a single route from London Stansted to New York JFK. Currently it operates 22 departures per week using a small fleet of 757s equipped with just 48 ‘suites’ and offers six-foot-six-inch lie flat beds. It recently announced plans to grow its fleet to eight aircraft in 2008 and start two additional routes from Stansted to Newark and from Paris to New York JFK.

Though operating routes out of London Stansted, Maxjet is based in Washington. It currently operates B767s with 102 seats on routes to New York JFK, Los Angeles (LAX) and Las Vegas (LAS) having axed an unsuccessful Washington route at the end of the summer season. Airline management is currently trying to secure traffic rights to serve the potentially lucrative Chinese market from the US. At the start of the winter schedule JFK is served daily, and LAX and LAS four times per week. Frequency on JFK will increase to 10 weekly flights by next March, LAX will increase to five weekly flights in December, and LAS will increase to six weekly flights by February.

This French airline operates six times per week from Paris Orly to Newark and since starting operations in January 2007 has transported 24,000 passengers up to the end of September. It describes its customers as Paryorkers. It currently operates a single 16-year-old 757-200 configured with winglets and equipped with 90 seats. In January, the airline will take delivery of its second aircraft and increase frequencies on its single route.

Silverjet: own terminal at Luton

Since starting its Luton to Newark service on 25 January this year Silverjet has carried in excess of 40,000 passengers on the route. In September, a second frequency was added on the route and next week sees the launch of services to Dubai. The airline is helped by having its own private terminal at Luton dedicated purely to Silverjet passengers.

To help promote itself to a wider audience the airline recently commissioned Hugh Hudson to re-make the classic British Airways ‘winking-eye’ TV commercial from some years ago, but with a Silverjet twist.

PrivatAir: flying on behalf of KLM, Lufthansa and Swiss

The recent incarnation of ‘exclusive’ all-business class airlines was started by Lufthansa in conjunction with PrivatAir, which operates BBJs and A319s on a small number of transatlantic routes. KLM and Swiss have also recruited PrivatAir to provide a similar service on routes from Amsterdam to Houston and Zurich to Newark.

A table summarising the different airlines is shown below: