California’s stagnant market is boosted by Virgin America and Southwest

According to World Bank figures in 2006, if California were a country it would have the world’s eighth largest economy, behind Italy but ahead of Canada, Spain and Brazil. In terms of aviation activity its airports handled just over 177 million passengers in 2006, about the same number as all German airports. Among European countries, only the airports in the UK (237 million) and Spain (193 million) generated more air passenger movements.

However, a closer look at the 12 airports which handled more than one million passengers in 2006 shows that traffic growth was virtually non-existent in California. However, in the first nine months of 2007 all of the top 10 airports are registering growth of up to 6%.

At seven of California’s top 10 airports (the exceptions being LAX, SFO and LGB) Southwest was the leading carrier in terms of passengers. At LAX and SFO, which contribute over half of all California’s traffic, United is the market leader, while JetBlue is dominant at Long Beach.

Southwest has quarter of market

An analysis of which airlines handled most passengers in California in 2006 shows that Southwest was responsible for almost a quarter of all passenger movements with just over 42 million.

Southwest’s lead over United is likely to increase as this year the airline returned in August to San Francisco and is gradually building up a significant presence there. It has just begun flying eight times per day between San Francisco and Los Angeles where it will compete against Alaska Airlines, American, Delta, United and Virgin America.

Among the top 15 airlines only Mexicana is a non-US carrier with nearly two million passengers primarily on routes to Mexico City (610,000) and Guadalajara (840,000).

After much procrastination by the regulatory authorities Virgin America finally took to the air from its San Francisco base in August, and is now operating six routes including between San Francisco and Los Angeles, which it serves with five daily flights.

A new route between San Francisco and San Diego begins next February and will be operated five times daily in competition with United and Southwest.

Another newcomer is ExpressJet, which previously focused on providing services for other airlines, primarily Continental for whom it operates over 200 aircraft as Continental Express. It is now developing a network under its own name using around 40 Embraer regional jets and currently operates from eight Californian airports, including smaller ones such as Monterey, Bakersfield, Fresno and Santa Barbara.

Not surprisingly, Mexicana is the largest foreign carrier, but it is followed in California by Qantas, Air New Zealand, British Airways, Lufthansa, Cathay Pacific, Singapore, EVA Air, Korean and Air France. It seems likely that some of the new wave of Mexican LCCs will soon start to operate more international flights and California is an obvious market.

For cheap fares, the best airport is Long Beach where JetBlue accounts for nearly 80% of passengers. The art deco terminal building was designated a cultural heritage landmark in 1990. ExpressJet recently began double-daily services to Fresno, Reno and Monterey using Embraer 145s. Long Beach is one of the world’s busiest general aviation airports and is also home to aircraft manufacturers Boeing and Gulfstream. 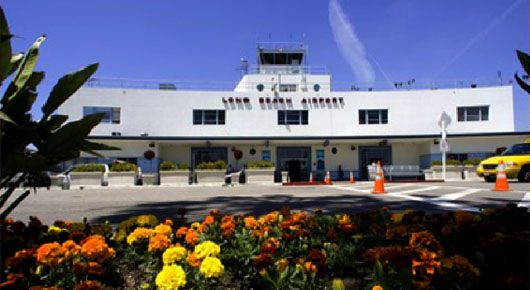