Management at Scandinavia’s largest LCC has been kept busy over the last few years. Having been owned by the Norwegian Olsen family since 1996, they sold out in 2005 to an Icelandic investment group – Fons Eignarheldsfelag. Later that year the airline bought local Danish rival Maersk Air from the AP Møller Group, but before the end of the year the airline had been sold again to the FL Group (another Icelandic company), owners of Icelandair. Finally, the FL Group sold the airline to Northern Travel Holding, a new entity, whose shareholders include Fons (44%), FL Group (34%) and Sund (22%). The company also owns all the shares in Iceland Express.

#2 at CPH behind SAS

Sterling’s main operational base is at Copenhagen (CPH) where it is the second largest carrier in terms of seat capacity after SAS. This winter the airline has around a 9% seat share (and 7% frequency share) compared with 50% for SAS. Third ranked Cimber Air has a 5.6% capacity share, but a higher frequency share of 11.8% through its use of smaller aircraft.

This winter Sterling is currently offering 23 destinations from CPH with three more ski destinations (Chambery, Geneva and Salzburg) starting in mid-December. The destinations and frequencies are summarised in the table below.

The highest frequency routes are the intra-regional trunk routes to Aalborg, Oslo and Stockholm, and the London Gatwick service that it inherited from Maersk Air. Domestic routes have become more viable since the government reduced the DKK150 (€20) passenger tax by 50% in 2006 and then abolished it completely in 2007. Of the nine Maersk Air destinations that the airline took on in the summer of 2006, six have been retained, but services to Frankfurt, Lisbon and Madrid have been axed.

Sterling faces direct competition from SAS on many of its routes but this winter it will operate to 11 destinations as the only carrier from CPH. These routes are Alicante, Barcelona, Budapest, Dortmund, East Midlands, Faro, Gran Canaria, Krakow, Madeira, Malaga and Tenerife. Most of these are low-frequency routes though Malaga is served daily.

In comparison on the Prague route Sterling faces competition from SAS, Cimber Air, Czech Airlines and SkyEurope. See this week’s farewatch to see what approach each airline takes to pricing on this route.

New destinations that have already been revealed for 2008 include a four-times daily service to Bergen in Norway (currently an SAS monopoly route) and two new destinations in Spain, Murcia and Valencia. Other seasonal summer routes which are likely to return include Athens, Biarritz, Burgas, Crete, Florence, Montpellier, Palma, Split and Venice.

All Boeing fleet, profitability within reach

The airline’s total fleet consists of around 25 Boeing 737s, ranging from 126-seat -500s, to 189-seat -800s which are spread across several bases including Aalborg, Billund, Oslo, Stockholm and from next March, Malmo. Blended winglets are being retrofitted to the fleet to improve fuel consumption.

According to the airline profitability is within reach now that the integration of Maersk is complete. In 2006 the airline reported an EBITDA loss of just DKK124 million (around $25 million), of which DKK100 million is attributable to the one-time costs of the Maersk takeover. 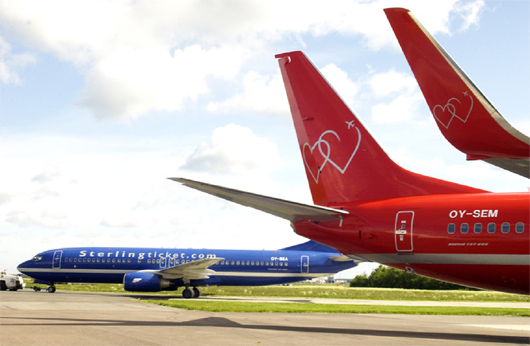