Heathrow’s #1 position under threat from Paris and Madrid 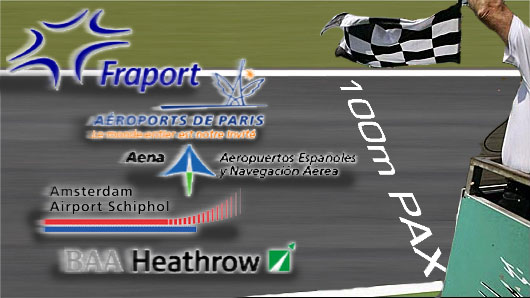 The battle for supremacy among Europe’s five major hubs is hotting up nicely. The base airports of British Airways, Lufthansa, Air France, KLM and Iberia are all developing strategies to ensure that they can meet the needs of the 21st century. This week’s announcement in the UK that the government is keen for Heathrow to get a third runway and sixth terminal recognises the fact that the other major European hubs have been making inroads into Heathrow’s position as the number one airport in Europe.

With nearly 70 million passengers Heathrow’s status as Europe’s busiest airport is under increasing threat. Traffic has stagnated for the last two years as the airport waits for Terminal 5 to be completed and become operational in March 2008.

Paris CDG and Madrid are now catching up fast with both airports having the advantage of four runways. Frankfurt is also planning for an additional major runway and further terminal capacity developments.

Based on a simplistic extrapolation of traffic data for the period 2002-2006 (and an estimate for 2007), it is conceivable that Madrid, currently fifth, could overtake all its rivals to become Europe’s busiest airport in around 10 years time. It could also become the first to reach 100 million passengers in Europe in around 2021.

So far in 2007 Heathrow’s traffic is again virtually flat while Frankfurt (+2.3%), Amsterdam (+3.8%) and Paris CDG (+5.4%) are showing only modest growth. Madrid is again the star performer with year-to-date traffic growth of over 14%.

Frankfurt most routes, Paris most movements

An analysis of OAG data at the start of the winter season shows that Frankfurt offers the most scheduled routes with 238, ahead of Paris CDG (225), Amsterdam (204), Heathrow (164) and Madrid (161). The lack of slots at Heathrow means that Frankfurt connects to nearly 50% more destinations than Heathrow, an issue that will not be resolved by the opening of Terminal 5 next year.

In terms of total aircraft movements (including cargo and non-scheduled) Paris leads the way with over 540,000 in 2006 while the other four have between 435,000 and 490,000. As a result the airport with the highest average number of passengers per aircraft movement is Heathrow with 141, reflecting the limitations caused by having just two runways. The remaining airports all average between 105 and 107 passengers per movement.

Heathrow determined to stay ahead

The UK government announced this week that it would consider a third 2,200-metre runway which could be operational by 2020 and would allow movements to increase to around 700,000 by 2030. Permitting mixed-mode operations on the existing two runways could increase movements to 540,000 without the need for a third runway but this would have a significant noise impact on many people living in the west London area. A period of public consultation until the end of February will now take place allowing arguments on both sides to be expressed.