Iberia’s future may currently be a topic rife with rumour and speculation, but the development of its main operational base at Madrid Barajas airport appears to be far less uncertain. Thanks to the opening of two new runways and its Stirling Prize winning Terminal 4 in February 2006, Madrid now has plenty of room for expansion. In 2006 passenger numbers passed 45 million, making it Europe’s fifth largest airport. It looks likely to overtake Amsterdam this year and possibly pass Frankfurt year. According to OAG data this winter Madrid has scheduled links with 161 destinations, about the same as London Heathrow but well behind Frankfurt which offers consumers over 230 routes.

Traffic has doubled in the last 10 years and even “9/11” only resulted in traffic stagnating for a year in 2002. Since then the airport has grown each year at between 6% and 9%. Using simple forecasting techniques for Europe’s five major hubs suggests that Madrid could become Europe’s leading airport within 9 years and the first to break the 100 million passenger mark, possibly as soon as 2021.

This year the airport is on course to break through the 50 million passenger barrier thanks to growth of over 14% during the first nine months. Major contributing factors include the start of Ryanair services to 15 destinations last November and the opening of an easyJet base in February 2007 which now serves 19 destinations.

In July of this year the airport handled five million passengers in a month for the first time. The airport’s peak to off-peak ratio of around 1.4 is much lower than at many Spanish airports reflecting the nature of its traffic mix which has a high business element.

Top four airlines are all Spanish

Not surprisingly Iberia is the dominant airline at Madrid though in 2006 it carried well under half of all passenger traffic. All of the top four airlines are Spanish reflecting the vibrant domestic market and a healthy level of competition.

For the first 10 months of 2007 the top five airline ranking positions have remained unchanged though easyJet is rapidly catching Air Nostrum, and is itself being caught by Vueling which recently added Bologna and Nice to its portfolio of routes at the airport.

Ryanair is now already in seventh spot and carried its one millionth passenger through the airport in early November, less than a year after starting operations. Of Ryanair’s 15 routes, 12 are monopolies with the airline only facing head-to-head competition on Dublin (versus Iberia and Aer Lingus), Marseille (versus Iberia) and Porto (versus Iberia and TAP).

Italy and France are top destinations

Spanish domestic traffic accounts for around 45% of all Madrid airport passengers. Leading international country destinations are Italy and France, followed by the UK and Germany. 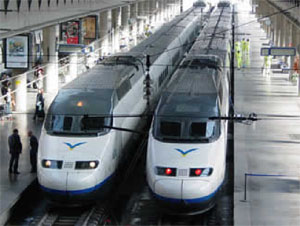 The Madrid to Barcelona route is currently Europe’s busiest airport-pair with over four and a half million passengers in 2006. However, the AVE high-speed rail link between the two cities, due for completion before the end of this year, will reduce rail journey times from just under four hours to two and a half hours. This will likely have a significant impact on air travel demand as was witnessed on the Madrid to Seville route when the AVE was first launched in 1992 in time for the Expo in Seville.