Determined not to be left too far behind by the apparently unstoppable growth of Emirates, Qatar-based Qatar Airways placed orders for 27 777s and 30 787s (plus options on another 35 Boeing aircraft) during the recent Dubai Air Show. Next week it will launch its 10th new route of the year when it becomes the first of the ‘Big 3’ Middle Eastern carriers to start flights to Scandinavia. A four-times weekly service to Stockholm Arlanda begins on 27th November and will be served by one of the airline’s two long-range A319s in a 110-seat, two-class configuration.

Qatar Airways was founded as recently as 1994 but has grown rapidly in recent years as it tries to emulate the success of its near neighbour Emirates. Passenger numbers have more than trebled from 2.3 million in 2002 to 7.1 million in 2006 while load factors have gradually climbed to around 74%.

The existing fleet of around 60 aircraft is currently all-Airbus with a focus on the A320 and A330. Apart from the recent order which gives Boeing a foothold in the airline, orders are also in place for five A380s and 80 A350s. By 2015 the airline expects its fleet to have doubled to 110 aircraft

Over three-quarters of Doha capacity 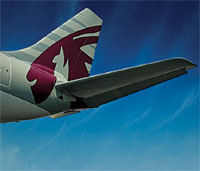 Qatar Airways is extremely dominant at its Doha base with around 76% of frequencies and 77% of seat capacity at the start of the winter season. In terms of capacity the next biggest airline is Emirates, with just under five percent, which comes from serving Dubai four times daily. Gulf Air has five daily flights to Bahrain but operates smaller aircraft and has around 4% of the airport’s capacity.

The most popular country destinations for Qatar Airways are the UAE (Dubai and Abu Dhabi), the UK, India, Bahrain and Germany.

The German market saw traffic grow by 52% in 2006 to 304,000 passengers with services split between Frankfurt, Berlin and Munich. Qatar Airways serves all three destinations while Lufthansa provides competition on the Frankfurt route.

Since the start of 2007 Qatar Airways has added the following new destinations:

The highlight for the airline was the launch of transatlantic services to New York (via Geneva) and Washington in June and July. Three of the new routes are to Indian destinations. Apart from Stockholm, which Emirates and Etihad do not currently serve, Qatar Airways also has a regional ‘monopoly’ on routes to Kathmandu, Algiers, Berlin, Cape Town, Denpasar Bali, Ho Chi Minh City, Luxor, Madrid, New York Newark, Washington, Nagpur, Cebu, Mashad and Yangon. If the fleet is to double in the next eight years then the airline will probably need to at least double the number of destinations served from 80 to over 160. It will therefore need to continue adding around 10 new routes each year.

Despite only processing around 10 million passengers in 2006 Qatar is already building a ‘next-generation’ airport to handle the airline’s planned growth. The New Doha International Airport is due to open in early 2009, a year before the expected first A380 delivery to Qatar Airways. Initially the terminal capacity will be 12 million but by the end of 2009 it will be increased to 24 million. The final phase in 2015 will see capacity expanded to 50 million passengers.

In the meantime the existing airport offers a Premium Terminal exclusively for Business and First Class passengers with Qatar Airways. Built at a cost of $90 million in nine months it offers spa, sauna, jacuzzi, massage treatment, a nursery, video games room, state-of-the-art conference facilities and bedrooms.