Calgary still #1 for Westjet after 11 years 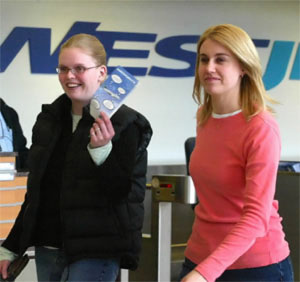 If it shows character to start an airline on a leap day, that is what the Calgary-based management team of Westjet did on 29 February 1996. Equipped with three 737-200s routes were launched from Calgary to Edmonton, Kelowna, Vancouver and Winnipeg. Eleven years later the airline has established itself as the only remaining real competition to Air Canada in the Canadian domestic market.

With a fleet of 68 aircraft and growth of over 15% in each of the last two years, the airline is on-track to transport 13 million passengers (or ‘guests’ as the airline prefers to refer to them) in 2007. During the third quarter of 2007 Westjet achieved a record 83.2% load factor and is averaging close to 82% for the year as a whole.

Calgary ahead of Toronto and Vancouver

Despite the airline’s domestic and international expansion (it flies to 10 US cities, Nassau in the Bahamas and soon to Mexico) Calgary is still its biggest base with 22% of its capacity.

Bigger than Air Canada in Calgary

While Air Canada may still be the dominant carrier in the domestic market as a whole, in Calgary at least Westjet offers more capacity though Air Canada and its affiliates offer more flights and more destinations.

Of Westjet’s top 15 routes from Calgary it faces direct competition from Air Canada on 12 of them. Only on Abbotsford, Hamilton and London (Ontario) does Westjet have a monopoly.

The most recent route that Westjet has started from Calgary is to Nassau, which has been operating twice per week since 5th November. Two new international routes to Mexico begin in December. Cabo San Lucas services start on 20 December and Mazatlan flights commence two days later. Both routes will be operated twice weekly.

Westjet estimates that during the winter season between 25% and 30% of available seat-miles (ASMs) will be operated on transborder (US) and international flights.