In 2006 Las Vegas dropped out of the top 10 of the world’s busiest airports despite passenger growth of 4.4% and is unlikely to reclaim its position in the near future despite continued growth.

The gambling capital of the US has grown by, on average, just over 4% per annum for the last 10 years. Southwest, America West and United have been the top three airlines throughout this period accounting for between 53% and 58% of all traffic.

Traffic in 2007 is growing at just under five per cent, which suggests that the airport will have to wait until 2008 to pass the 50 million passenger mark. 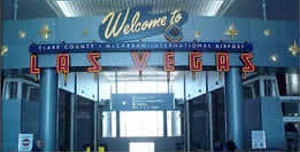 Seasonality is not much of an issue with the peak to off-peak ratio in 2006 being just 1.21. July and August are the peak months, but not by much. Apart from AirTran (seven new routes) the airport has seen two further carriers enter the San Francisco market. United and US Airways have been joined by Southwest (seven daily flights) and Virgin America (three flights per day) during 2007.

Southwest has gradually been increasing its market share of traffic at McCarran from 27% a decade ago to 33% in 2006.

The fastest growing airline is low-cost niche operator Allegiant, which saw traffic increase nearly 60% in 2006 to 1.4 million passengers. US Airways increased passenger numbers by 27% and Southwest by 11%. America West Express (down 36%), American (down 12%) and Delta (down 10%) were the biggest losers at the airport in 2006.

AirTran may soon be figuring among the top 10 airlines having launched seven new routes this year to Akron, Bloomington, Flint, Dayton, Rochester, Moline and, most recently, to Indianapolis.

No one route dominates the airport’s route network. Destinations in California, Arizona, Colorado and Texas are all popular with Los Angeles and Phoenix the only two routes with a greater than 5% share of capacity.

Domestic routes account for 95% of capacity, with Canada (seven destinations) and Mexico (six destinations) the main international links. Korean Air serves Seoul, while leisure airlines Condor and LTU serve Frankfurt and Düsseldorf respectively this winter. From the UK there are direct services to London Gatwick (with Virgin Atlantic), Manchester (with bmi) and London Stansted (with business class only airline Maxjet).

Fares well below US average

Thanks to the influence of Southwest and the high proportion of price-sensitive leisure travellers, average air fares at Las Vegas are consistently well below the US average.

With the possible exception of a couple of Florida airports, Las Vegas could legitimately claim to be the cheapest major airport in the US as far as passengers are concerned.

* ‘Leaving Las Vegas’ was the first single on Sheryl Crow’s multi-platinum 1994 debut album ‘Tuesday Night Music Club’. The track reached #66 on the UK singles chart and #60 on the Billboard Hot 100 in the US. It was also the name of a 1995 movie starring Nicolas Cage (who won an Oscar for his role) and Elisabeth Shue.