The voters in Switzerland continue to resist the idea of Switzerland joining the European Union, but as far as aviation is concerned the country offers most of the freedoms of access of any EU member. The collapse of the national airline Swissair in the wake of ‘9/11’ came as a major shock to a nation that prides itself on its business achievements and methods. As a result traffic at Swissair’s main hub at Zurich fell dramatically and has still to pass the peak it achieved in 2000 of 22.7 million passengers.

Switzerland’s traffic at its three major airports in 2007 should reach around 36million, passing the previous highest of 34.2 million in 2000. Year to date traffic at Zurich is up 7.6%, at Geneva 9.6% and at Basel 9%. Geneva was less affected by the collapse of Swissair, though Basel saw traffic drop by 34% between 2000 and 2003, before easyJet came to the rescue. Other airports in Switzerland with scheduled traffic include Berne, Lugano and St Gallen Altenrhein which, between them, handled just under 400,000 passengers in 2006.

While the re-invented Swiss continues to be the dominant carrier in Zurich with nearly 60% of scheduled capacity, in Geneva and Basel easyJet is the leading carrier.

In mid-December easyJet will celebrate the 10th anniversary of its first flight from London Luton to Geneva. The airline now has eight A319s based at the airport serving 24 destinations. Basel became its second Swiss base in June 2005 though services had begun in March 2004 from Liverpool and London Stansted.

Growth at Zurich airport (operated privately by Unique, the curious name adopted by Flughafen Zurich AG) is being driven by LCCs. While year-to-date traffic is up 7.6%, LCC traffic is up 27.7% which compensates for the 13% decline in charter traffic.

Air Berlin is now clearly established as the second busiest carrier at the airport and operates primarily to Germany and Spain. Five German destinations are served at least twice on each weekday. Other LCCs present at the airport include Germanwings (to Cologne/Bonn), Niki (to Vienna), Clickair (to Barcelona) and Aer Lingus (to Dublin)

easyJet recently re-started service to London Luton after an absence of nearly three years, but Helvetic, which at one time operated as many as six Fokker 100s, now operates just three aircraft and focuses, at least in winter, primarily on charter operations.

New routes from Zurich this winter include Swiss operating daily to Delhi with an A330 and in contrast, Blue Islands started three-times weekly flights to Jersey on 6 November using a 32-seat Dornier 328.

Another local airline, Edelweiss Air operates low-frequency charter services to a variety of more exotic destinations such as Sri Lanka, Egypt and Morocco.

From the end of next March Swiss has already revealed it intends to start new daily services to Florence, St Petersburg and Sofia. In May, a new daily service to Shanghai will be launched using an A340.

Geneva’s traffic will pass the 10 million passenger milestone for the first time this year. A major highlight of 2007 was the arrival in June of Qatar Airways who operate flights from Doha through Geneva to New York’s Newark airport.

This winter sees easyJet begin new services to Marrakech (thrice weekly) and Las Palmas (twice weekly) while a new route to Birmingham begins on 14 December. Other carriers adding new routes this winter to support the ski market include Blue Islands (to Jersey), Flybe (to Newquay), Aer Lingus (to Belfast International) and Thomsonfly (to Doncaster/Sheffield).

Next summer Swiss plans to add new routes to Bucharest, Palma and Rome. 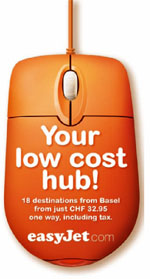 Basel, though considered primarily a Swiss airport, is something of an anomaly as it straddles both Switzerland and France. With 18 destinations this winter, easyJet is the dominant carrier at the airport. The busiest route is to Berlin SXF, which is operated three times daily.

Not every route has been a success for the airline. Flights to Munich were dropped after operating for only four months last winter and the Paris CDG and Prague services also appear to have been axed. Swiss, which only started Prague services from Basel back in January, appears to have been successful in driving easyJet off this particular route.

During 2007 three new destinations were inaugurated – Olbia, Marrakech and Porto. easyJet’s capacity at the airport appears to have been reduced by around 20% this winter.

Ryanair only began services to Basel in October, but now operates five routes to Stockholm Skavsta, Dublin, Girona, Alicante and Valencia. On Alicante it competes head-to-head with easyJet. With 17 departures per week the airline has already grabbed a 7% share of seat capacity at the airport.

Other LCCs with a presence in Basel include Air Berlin and TUIfly.com, which this winter each operate just eight flights per week to primarily Spanish destinations, though TUIfly flies to Bari in Italy. This means that LCCs have an estimated 53% share of scheduled capacity at the airport this winter.

On international routes from all airports Swiss has a 36.4% share of capacity, well ahead of easyJet 12.3%, Lufthansa 7.0% and Air France 6.7%. LCCs have about a 21% share of international capacity spread across easyJet, Air Berlin, Germanwings, Ryanair, Clickair, Aer Lingus, TUIfly.com, niki, Atlas Blue, Helvetic and Norwegian.

The top 10 countries in terms of frequency and capacity for this winter are shown below:

Europe’s major countries are all well represented in this list along with the US. No Nordic or Central European country features in this ranking.

Swiss: back on track with help from Lufthansa

The hard-won Swiss reputation for reliability, efficiency, prudence and quality of service was somewhat tarnished in 2001 when the national airline Swissair collapsed in dramatic fashion. The Swiss airline that is now flying and looks to all intents and purposes pretty much like the old Swissair was formed out of Crossair the successful Swiss regional airline which took over many aircraft, staff and routes and was relaunched in April 2002 as Swiss International Airlines (SWISS).

However, with the airline continuing to lose money all through the noughties it has now been taken over by Lufthansa and thus become a member of the Star Alliance. In 2006, Swiss passenger traffic grew by 10% to 10.51 million passengers at a seat load factor of 79.8% (up 1.7 points), although on European services the load factor was rather lower at 71.3% (up 5.4 percentage points). This was achieved despite operating 7.3% fewer flights in 2006 highlighting the shift to bigger aircraft. Latest financial results indicate that Swiss finally made an operating profit of around $185 million in 2006. However, it has a way to go before it wipes out the billion dollar loss it made during the period 2002-03. 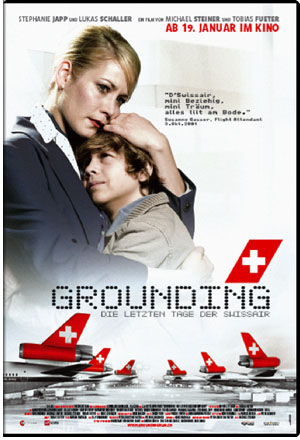 The demise of its national airline was such a dramatic event that it inspired film-makers to turn it into a movie (a bit like Titanic – you know the ending but you still want to watch it happen!). On 19th January 2006 ‘Grounding: Die Letzten Tage Der Swissair’ opened in cinemas and proved to be something of a Swiss blockbuster. Not surprisingly, it has been shot as a thriller although some might view it more as a black comedy. In the first half of 2006 the film ranked third at the Swiss box office beaten only by ‘Ice Age 2′ and ‘The Da Vinci Code’.

During the year, over a third of a million people paid good money to sit and watch the story of how their national airline was mismanaged into bankruptcy. Last September the film became available on DVD with a bunch of bonus material, interviews, news reports and archive promotional material from Swissair.