Australia is the sixth largest country in the world, consisting of some 7.74 million square kilometres of territory. This makes it almost the same size as the contiguous US (which excludes Alaska and Hawaii). With a population of just 21.1 million people, its population density of 2.6 people per square kilometre is lower even than that of Iceland (3.0) and Canada (3.2). Despite this, Australia’s airports handled nearly 110 million passengers in 2006.

After growth of just 10% between 1997 and 2002, passenger traffic has grown by over 40% in the last four years, helped by the emergence of low-cost carriers such as Virgin Blue and Jetstar. Despite this, impressive growth in passenger volumes aircraft movements have remained virtually unchanged as increased demand has been catered for primarily on bigger aircraft.

The top five airports at Sydney, Melbourne, Brisbane, Perth and Adelaide handled around 70% of all domestic traffic, and 95% of all international traffic, in 2006.

Although the top 12 airports handle around 90% of all Australian airport traffic, according to OAG there are 140 airports across Australia with scheduled services this winter.

80% of traffic is domestic

Around 80% of Australia’s airport traffic is flying on domestic services. Six airlines have at least a 1% share of domestic capacity.

A number of airlines operating smaller aircraft have more than a one percent share of domestic flights. These are led by Aero-Tropics, which has 3.4% of scheduled flights operating eight seat aircraft, Macair (1.9% of flights) and Regional Pacific Airlines (1.3%).

Domestic traffic has been growing by on average just under 7% in the first nine months of 2007. The increased competition brought on by the entrance of Tiger Airways into the market should help to sustain this healthy growth rate, at least for a while.

A total of 47 airlines operate international services to/from Australia. Not surprisingly, Qantas is the market leader with just under a quarter of all flights and seats. 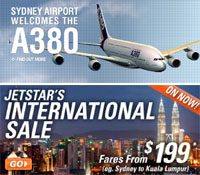 According to government research, the 2.1% increase in international traffic in 2006 was driven mainly by Australian residents travelling overseas rather than the arrival of international visitors. This lack of growth in the inbound market resulted in a massive global TV and press campaign led by the controversial slogan “So where the bloody hell are you?”

Recently, second-ranked Singapore introduced the A380 onto the Singapore to Sydney route and Air Asia X’s first route, which started on 2 November, links Kuala Lumpur and the Gold Coast. Viva Macau is another airline that has started flying to Australia in the last few months, operating three times weekly to Macau using 767s.