It seems appropriate that the world’s busiest airport should also be home to the world’s busiest single base for a low-cost airline. Despite AirTran being only a quarter of the size of Southwest, its base at Hartsfield-Jackson Atlanta International Airport (ATL) is bigger than any of Southwest’s with nearly 250 daily departures. To achieve this AirTran has doubled its passenger numbers through Atlanta from 7.3 million in 2000 to 14.7 million in 2006. This means that AirTran now accounts for over 17% of Atlanta traffic.

During the same period Atlanta’s traffic has grown by under 6% and even fell in 2006 as a result of Delta’s 10% reduction in passenger numbers.

AirTran growing at close to 20%

The seasonality profile has been consistent in each of the last three years with the dip in September explained by the high proportion of capacity assigned on routes to Florida. September is normally peak season for hurricanes in Florida which tends to make leisure travellers slightly more wary of visiting the region.

Despite this rapid growth at Atlanta the proportion of AirTran passengers flying on routes not involving Atlanta has risen quickly from less than 5% in 2000 to over 25% in 2006.

This winter AirTran is operating to 52 destinations from Atlanta. The top 10 are shown in the table below.

AirTran has consistently reported net profits in the last five years though margins have been very low except in 2003 when a number of exceptional items resulted in a 10% margin. According to the airline AirTran’s non-fuel unit costs of 6 cents per ASM for the first half of 2007 are the lowest in the US, even better than Southwest, when adjusted for average sector length. AirTran’s average stage length in 2006 was 652 miles (1050 kilometres) and the average fare was $90.58 (£45/€67) similar to easyJet in Europe.The airline’s current fleet of 87 717s and 50 737NGs will expand by 63 737s during the next five years to take the airline to 200 aircraft. However, ASM growth which has been averaging around 20% in the last few years will slow to around 10% from 2008 onwards. Assigned seating is provided and every flight also offers a limited business class.

Elton and the jets 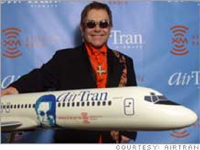 To help promote the installation of live XM Satellite Radio on all its flights in 2005 AirTran operated some 717s adorned with images of iconic rock star Sir Elton John. AirTran also received some high-profile publicity when they were minor sponsors of the 2005 Indianapolis 500 race winner, Dan Wheldon. Clearly the airline likes to be associated with Brits!