On Friday 7 December 2007, Geneva airport broke through the 10 million passenger mark for the first time and with traffic growth of 9% the airline finished the year reporting a total of 10,845,545 passengers. In the last five years traffic has grown by an impressive 43%, or on average by 7.4% per annum. 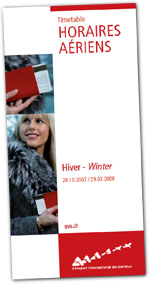 Between 1990 and 1997 traffic at the airport was virtually unchanged. The more recent growth can be attributed in large part to easyJet’s decision in 1999 to make Geneva one of its first continental bases. On 18 December last year, easyJet celebrated the 10th anniversary of its inaugural flight to London Luton and now serves over 30 destinations.

Geneva’s seasonality profile may look like the nearby mountain ranges but in fact reflects the varied nature of demand. In winter, ski traffic descends on the region while business traffic to the many international organisations with headquarters in the Swiss city assures a good year-round underlying demand. In summer, there is also a peak as locals go on holiday and hikers come to take advantage of the pleasant, undulating scenery nearby.

Qatar links Geneva to US and Middle East

Among the route developments in 2007 was the arrival in June of Qatar Airways, which operates five flights per week from Doha through Geneva to New York’s Newark airport. This offers locals an alternative to Swiss, which operates daily to New York JFK, and Continental, which also offers daily connections to its Newark base. Qatar became the second of the ‘big 3’ Middle Eastern carriers to serve Geneva following Etihad, which flies to Abu Dhabi four times weekly. Emirates currently prefers to serve Zurich.

Other new routes in 2007 included easyJet’s new services to Marrakech (thrice-weekly) and Las Palmas (twice-weekly), while a new route to Birmingham began on 14 December. Other carriers adding new routes this winter to support the ski market include Blue Islands (to Jersey), Flybe (to Newquay), Aer Lingus (to Belfast International) and Thomsonfly (to Doncaster/Sheffield). All this has helped easyJet consolidate its position as Geneva’s leading airline.

Not all routes offered by easyJet have been a success. Services to Dortmund and Hamburg have been axed as has the ski route to Doncaster/Sheffield (now operated by Thomsonfly). Belfast and Newcastle services which were operated year-round have been reduced to just winter services.

Apart from easyJet, 11 other LCCs operate to Geneva during the peak winter ski season with bmibaby (2.0% of capacity) and Jet2.com (1.4%) being the largest. LCCs currently account for around 38% of all scheduled capacity. This winter, the airport reports that a total of 93 destinations will be served by direct scheduled services, 70 in Europe and 23 on other continents. These services will be provided by 49 scheduled airlines, 33 European and 16 non-European.

This summer, Swiss plans to add new routes to Bucharest (thrice-weekly), Palma (twice-weekly) and Rome (daily). Apart from Swiss, other home-grown airlines with a presence in Geneva include Flybaboo which operates six routes (four to Italy), Edelweiss Air (which operates weekly services to five destinations) and Darwin Airline, which flies 12 times weekly to Lugano.

In 2006, the UK remained the leading country market to/from Geneva with traffic growth of nearly 14%. In contrast, the second ranked French market remained unchanged in size.

The London market accounts for 70% of the UK market and reported almost 8% growth in 2006. Five of the top 10 destination markets saw demand fall in 2006 (Paris, Zurich, Barcelona, Frankfurt and Rome), but the growth in smaller markets and from new routes more than compensated for this.