CGN breaks through 10 million barrier thanks to LCCs

Following last week’s report on how Geneva had broken through the 10 million passenger milestone, this week anna.aero takes a closer look at Germany’s sixth busiest airport, Cologne/Bonn (CGN), which also passed that mark at the end of 2007.

Since establishing itself in 2002 as Germany’s leading airport for low-cost airlines traffic has virtually doubled from 5.4 million in 2002 to 10.5 million last year. This has been achieved thanks primarily to the creation of two German LCCs, Germanwings (which has its HQ at the airport) and TUIfly (formerly Hapag Lloyd Express, a.k.a. hlx). 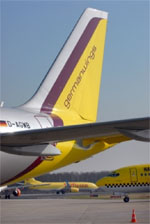 Domestic passengers now represent just 35% of all airport traffic compared to 50% in 2002, despite growing by 35% during the period. However, international traffic has been the big success increasing by 150% during the same period from 2.7 million passengers to 6.9 million.

Germanwings and TUIfly have half the market

This winter these two airlines operate over 60 routes, though in summer the addition of many seasonal routes will see Germanwings alone offer over 60 different destinations and the airport as a whole will offer well over 100 destinations.

Until recently easyJet ranked fifth among scheduled carriers but from the beginning of January routes from East Midlands and Liverpool (both operated since June 2004) have been terminated leaving just a daily service to London Gatwick. However, bmi regional will begin almost daily services from East Midlands from 11 February using an Embraer regional jet. Other foreign LCCs operating at CGN include Wizz Air (serving Gdansk and Katowice) and Blue Air (which offers five weekly flights to Bucharest).

CGN’s biggest coup so far has been to attract Continental to operate daily transatlantic services to New York Newark. The service started on 11 May 2006 and is operated by a 757. Frequency is reduced to just five flights per week during the winter season.

Other legacy airlines with a presence at CGN include Lufthansa (obviously), Turkish Airlines, KLM, Austrian, SAS and CSA. German regional carriers include Intersky (to Friedrichshafen), Luftfahrt Gesellschaft Walter (to Erfurt) and OLT (to Rostock).

Less common scheduled routes this winter are provided by Armavia to Yerevan (Armenia), BH Airlines to Sarajevo and Iran Air with twice-weekly flights to Tehran.

The airport has a typical European seasonality profile though the summer peak extends all the way through to October.

For this summer, apart from the new bmi regional service to East Midlands, there will be new scheduled services provided by Lufthansa to Istanbul (already served by Turkish Airlines) and Germanwings to Osijek (Croatia), Pula, Bordeaux and Riga while Krakow services will be redirected to nearby Katowice from the beginning of April.

With its ideal location at the heart of Europe CGN makes an ideal connecting point, though this is something LCCs do not normally encourage. However, the airport has recently set up a dedicated website which offers a ‘look and book’ link where customers can find the best connections via CGN. Flight connection insurance can also be taken out via the website. If a passenger misses their connecting flight due to a delayed flight to Cologne/Bonn the insurance will make reimbursements for a new reservation up to €500. If a connecting flight is not available until the next day the insurance will also cover costs for hotel accommodation up to €100.

Flight transfers will also be easier with special transfer desks in the baggage claim area. Arriving in Cologne/Bonn passengers simply collect their baggage as usual and take it to the transfer desk. Here they can check in for the connecting flight and will be issued with a boarding pass. This transfer service is, however, not available for passengers arriving from a non-EU country, since they have to pass through customs.