Why does Ryanair’s Bournemouth base take on Flybe at Southampton but shy away from competing on German routes from Birmingham?

The decision to select Bournemouth, on the UK’s south coast, as Ryanair’s 24th base represents a great start to the new year for the MAG (Manchester Airports Group) owned airport which last year joined the “1 million club” of airports for the first time. During 2007 Ryanair operated to nine international destinations (plus Glasgow Prestwick) from the airport, which it started flying from as long ago as 1996 when a Dublin service was first introduced.

Back in 2002 KLM’s UK-based LCC buzz, announced plans to launch a base from Bournemouth at the start of the summer 2003 season. However, after Ryanair’s acquisition of the airline on 31 January 2003 the plan was shelved just four days later, less than two months before flights were due to start.

Traffic has been growing consistently over the last three years though ironically traffic dipped in November 2007 for the first time in several years.

With a focus on the outbound leisure market it is no surprise that August is the peak month for air travel at Bournemouth with a peak to off-peak ratio (August v November) of around 2.2 in 2007.

The graph below shows monthly traffic up to November 2007 on the eight routes operated by Ryanair during that period. Services to Alicante and Milan Bergamo only began in December. Around 35% of Bournemouth’s traffic in 2007 was carried on Ryanair flights.

The daily services to Barcelona Girona, Dublin and Glasgow Prestwick represent the core of Ryanair’s network here. French routes to Marseille and Nantes only operated during the peak summer period while Pisa has been dropped for winter, but will re-start this summer. Madrid and Shannon services on the other hand appear to have been axed completely, joining a short-lived Frankfurt Hahn service that was axed in 2003.

The recent base announcement trumpeted five new routes – Palma, Malaga and Murcia in Spain, Wroclaw in Poland and Nantes, which was actually already served last summer. Palma and Malaga are served by Thomsonfly from the airport meaning that the only really new destinations Ryanair is adding are to Murcia and Wroclaw. Clearly there must be many Polish immigrants settling on the UK’s south coast as this route becomes the fourth scheduled route to Poland after Katowice, Krakow and Gdansk.

Currently all Ryanair services are operated by aircraft based downroute, but the basing of a single 737-800 from early April at Bournemouth (BOH, not BOU which is Bourges in France) will enable the five ‘new’ routes to be served by the BOH-based aircraft while also adding a second daily frequency to Glasgow Prestwick.

Competing with Flybe at Southampton

Bournemouth airport is just 40 kilometres from Southampton which is almost twice as busy and a major base for Flybe. However, while Southampton has the better natural catchment area its runway is limited to just 1,723 metres making typical LCC operations with Boeing and Airbus aircraft unviable (just ask Air Berlin about their 737 services to Paderborn in 2004/05). At 2,271 metres BOH’s runway can cater for 737-800s flying fully loaded to Spain.

Ryanair’s Spanish routes overlap with Flybe at Southampton on Alicante, Malaga, Murcia and Palma and both airports will now offer day return schedules to Glasgow, though Flybe offers a much better schedule with up to six daily flights. 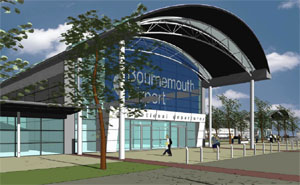 In May 2007 the airport issued a Masterplan in response to the UK government’s latest White Paper on air transport. Bournemouth believes that by 2010 traffic will have increased to around 1.8 million passengers and three million by 2015. By 2030 the airport envisages the possibility of around 4.5 million annual passengers, assuming that no more than one additional runway is built in the south-east region. As part of a £32 million investment programme announced in December 2006 part of the existing terminal will be replaced with a much larger extension.

Hot on the heels of Ryanair’s decision to make Bournemouth their 24th base comes news that Birmingham will become their 25th. The airline announced that it would be launching 20 new routes this summer using just two based aircraft. Anna.aero has taken a closer look to see how this has been achieved.

To start with three of the new routes (to Barcelona Girona, Marseille and Pisa) will be served thrice-weekly by aircraft based at those airports rather than at Birmingham. That explains why the start dates for these routes are earlier than all the others. The remaining 17 new routes will indeed be operated by just two aircraft. This is done by offering minimal frequencies on many routes. None of the new routes are served daily with eight served just twice per week. Seven destinations are served thrice weekly while only Barcelona Reus and Stockholm Skavsta are deemed worthy of four weekly flights. The aircraft rotation plan for a typical week for each aircraft is shown below.

The first based aircraft begins flying on Tuesday 17th June with the second aircraft commencing operations a fortnight later on Tuesday 1st July.

Why no German routes?

None of the 20 new routes are to German destinations which seems a little strange given that Ryanair is active at eight German airports none of which are currently served from Birmingham. Given how important Germany is to Birmingham-based Flybe (it operates to Düsseldorf, Frankfurt, Hamburg, Hanover and Stuttgart which it inherited when it took over BA Connect last year) it seems surprising that Ryanair has chosen to ignore this potentially lucrative market, at least for now.