While Europeans head for Austria, France, Italy and Switzerland when the snow begins to fall, many Americans head for Colorado and the Rockies. The state of Colorado is basically rectangular with Denver just above the middle and the Rockies occupying much of the western side. Denver, known as the Mile High City (and Wall Street of the West), and its outlying regions have a population of close to three million, which represents around two-thirds of the whole state.

On 27 February 1995, Denver’s old Stapleton airport was closed and the new Denver International Airport (DEN) was opened the following day. This huge airport, located 23 miles north-east of downtown Denver currently has six runways (of a planned 12) and in 2006 entered the Top 10 of world airports when it handled 47.3 million passengers, an increase of 9.1% on the previous year.

The graph highlights the dominance of United and its partners and subsidiaries (SkyWest, Ted) although United’s share of traffic at Denver has fallen from around two-thirds in 1996 to just under half now. The impressive growth of low-cost Frontier Airlines can also be seen with the airline’s share of DEN traffic now at just under 20%. In the first 11 months of 2007 airport traffic was up 4.8% suggesting that DEN came close to handling 50 million passengers last year.

Given the dominance of Denver in Colorado and the major hub that United operates it is no surprise that United continues to be the leading airline in the state of Colorado.

However, comparing market shares of passenger numbers in 2006 with the first 10 months of 2007, shows that Frontier and Southwest have made the biggest gains. Frontier is now around half the size of United (not including its SkyWest partner) in Colorado, while Southwest has jumped past American into fourth place.

There are other airports too!

Not surprisingly, there are only a handful of other airports of note in Colorado, the largest of which is Colorado Springs, in the shadow of Pikes Peak. Back in 1996 the airport handled nearly five million passengers, but its biggest airline, Western Pacific, moved its base to the new Denver airport in June 1997 and by 1998 the airport was serving just over 2.6 million passengers. Since 2001, passenger numbers have stabilised around the 2.1 million mark.

In 2007, the leading carrier at the airport is United / United Express followed by American / American Eagle.

Vail: gateway to the slopes 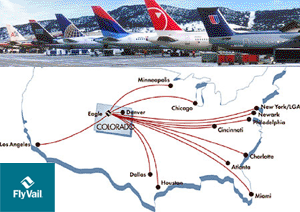 An interesting airport is Vail / Eagle County airport, which serves as a gateway to the main ski resorts of Vail, Beaver Creek, Breckenridge and Keystone. In 2006 the airport handled around 450,000 passengers, but two-thirds of these were in the period January to March. During the ski season the airport is served by most major airlines, but during the off-peak summer season the only regular flights are to Denver (United), Chicago O’Hare (United) and Dallas/Fort Worth (American).

The fourth busiest airport in Colorado is Grand Junction, which is in western Colorado and handled around 340,000 passengers in 2007. Around half the traffic goes to/from Denver, with other year-round scheduled services to Salt Lake City, Phoenix and Las Vegas.

According to US DOT data, Vail/Eagle County is among the top 5 most expensive airports in the US with fare premiums averaging around 30%. Presumably people who can afford to go skiing in Colorado can afford the higher air fares to get them there. Denver’s average fares since 2006 have been below average in short-haul markets, but typically above average on long-haul markets.