Swiss continues to re-establish Zurich base

It has taken the re-invented Swiss national carrier a while to get its act together but finally there are signs that, with a little help from Lufthansa, Swiss International Air Lines, the carrier that emerged from the ashes of Swissair after its fateful post-‘9/11′ implosion, is becoming a mature force once again. Although headquartered in Basel (the airline evolved out of the former regional airline Crossair), its main base is at Zurich Kloten airport (ZRH).

Most competition to London

Swiss has no direct competition on around 40% of the frequencies it operates from Zurich. Since these include several long-haul routes it means that Swiss has a monopoly on nearly 60% of the ASKs it flies from ZRH. This includes (in winter at least) routes to Athens, Birmingham, Brussels, Rome FCO, Manchester, Nice, Stuttgart and Venice in Europe as well as Boston, Delhi (new this winter), Johannesburg, Mumbai and Tokyo further afield.

Routes on which it faces two competitors on the same airport-pair are:

These routes represent around 15% of Swiss’ capacity at ZRH, though due to the mostly shorter sector lengths involved only around 6% of total ASKs. Apart from competition to London City there is competition to London Heathrow (against British Airways which also flies to Gatwick) and easyJet which has recently returned to the London Luton route.

The German routes are probably less competitive than might at first seem since Swiss has become part of Lufthansa’s growing airline group. Although LCCs do not have a huge presence at ZRH (easyJet currently has just one route and Ryanair none), Air Berlin in particular believes it can provide an appealing value proposition for Swiss customers.

To mix-and-match the right aircraft to the correct route Swiss also wet-leases a PrivatAir B737 on the New York Newark route (against Continental) and uses helvetic’s Fokker 100 on routes from Zurich to Budapest, Brussels, Manchester and Warsaw. It also wet-leases a Flightline BAe 146 to operate to Birmingham and Venice.

Swiss growing at around 14%

This summer there will be new services with Swiss from Zurich to Florence (three times daily), St. Petersburg and Sofia (both daily) while a daily Shanghai service begins in May.

A new First Class Lounge was recently opened at Zurich to improve the quality of service for Swiss’ highest-paying passengers. Offering private work areas, day rooms with showers, free internet access via provided laptops, a library, TV and a range of international newspapers. Pre-flight dining is also an option for those with time. 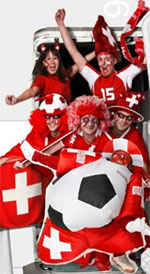 With the Euro 2008 Football championships taking place in Austria and Switzerland this summer the airline can expect an increase in traffic and a high profile. One Airbus aircraft has already been re-painted to celebrate the event. Of the 31 matches only three will actually be played in Zurich though – France v Romania (9th June), Italy v Romania (13th June) and France v Italy (17th June). It seems that in footballing terms at least Basel is the capital of Switzerland, not Zurich.

Demonstrating an admirable understanding of revenue management one unofficial online provider is selling tickets for the France v Italy match at a price beaten only by the opening game involving the hosts and the potentially lively Germany v Poland clash in Klagenfurt.