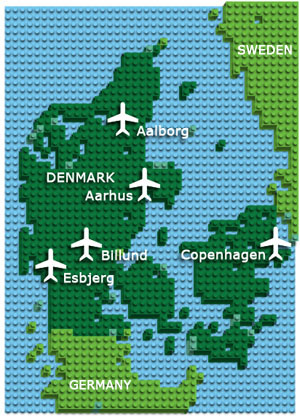 Despite a modest local population Copenhagen’s Kastrup airport (CPH) has established itself as the busiest hub in northern Europe. In 2007 it handled over 21.4 million passengers, up 2.5% on 2006 despite a small reduction in the number of aircraft movements. The phasing out, yes out, of a government departure tax has helped stimulate demand especially for domestic flights.

Since the Oresund Bridge linking Copenhagen with Malmo was opened in July 2000 much of southern Sweden can now legitimately be considered part of Copenhagen Airport’s catchment area. In 2007 over 25 million people used the bridge either by road or by rail including many Danes who have moved to southern Sweden as housing is cheaper.

Denmark’s second largest airport at Billund also had an excellent 2007 with growth of 20%.

Nordic neighbour Norway was the leading country market for CPH in 2006 followed by the fast-growing German market, the UK and Sweden (where traffic declined by almost 5%).

The US market, which grew 15% in 2006, is the only non-European country in the top 12 which combined account for just under three-quarters of all passenger destinations. 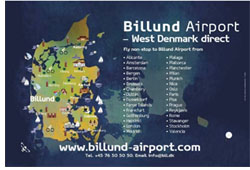 Billund Airport was built on land donated by the Lego corporation and first opened for commercial services in 1964. Centrally located on the Jutland peninsula the airport serves as gateway to nearby Legoland (which is actually closed in winter) and much of the Jutland region. International scheduled flights began in 1984 after EC liberalisation of air services.

In 2007 passenger numbers reached an all-time high of 2.26 million, up 20% on the previous year and beating the previous high achieved in 1997. The completion in 1998 of the Great Belt Fixed Link road bridge and rail tunnel linking Funen to Zealand considerably reduced demand for domestic air travel to Copenhagen and explains why traffic has taken 10 years to recover to this level.

In November 2006 Ryanair began a route from Billund to Frankfurt Hahn that lasted just nine weeks. During that time some 2,681 passengers were carried at an average load factor of just 26% making it possibly one of the most disastrous routes ever started by Ryanair.

The biggest domestic air route in Denmark is between Copenhagen and Aalborg. SAS operates 62 departures per week on the route, Cimber Air 34 and Sterling 26. This route alone accounts for 45% of domestic capacity and is the only domestic route with three carriers. The only other domestic route which is not a monopoly is between Copenhagen and the island of Bornholm in the Baltic Sea where Cimber Air and Danish Air Transport compete. The remaining seven routes are monopoly routes. Over 98% of domestic capacity flies to/from Copenhagen though there are low frequency routes between Aarhus and Aalborg (two per week), Aarhus and Billund (four per week) and Esbjerg and Billund (nine per week).

Overall SAS and Cimber Air offer over 80% of capacity and 85% of frequencies. Cimber Air operates primarily ATR42s on its domestic routes supported by some larger ATR72s. Danish domestic traffic has been stimulated in recent years by the gradual phasing out of a DKK 75 (€10/$15) passenger tax. As an example, Copenhagen’s domestic traffic, which fell from a peak of 2.79 million passengers in 1997 to just 1.57 million in 2003, grew nearly 11% in 2006 and a further 9% in 2007 to 1.99 million passengers well above the rate of international growth.

Limited international routes from other airports

Apart from Copenhagen and Billund there are a handful of international flights operated from other Danish airports during the winter season. These are:

SAS does not operate any international routes from outside of Copenhagen.

The decision by the AP Møller group in 2005 to sell its Copenhagen-based airline Maersk Air to an Icelandic investment firm which had also acquired Sterling European Airlines resulted in a consolidation of the two airlines into a single entity Sterling Airlines. Like SAS it operates bases across Scandinavia and competes with Oslo-based Norwegian for the mantle of largest LCC in the region. In 2006 Sterling reportedly carried 5.3 million passengers compared to the 5.1 million that flew with Norwegian. However, Sterling has not reported any figures for 2007 whereas Norwegian has grown 25% to 6.36 million passengers in 2007.

Sterling is by far the largest LCC in the Danish international market with 9.4% of the market in terms of seats. Ryanair has 2.6% thanks to its Billund and Aarhus routes and Norwegian (two routes), easyJet (two routes) and Air Berlin (three routes) each have between 1.5% and 1.8% of the market. FlyNordic, SkyEurope, Aer Lingus, Transavia and TUIfly all have a small presence in the market taking the LCC share to around 19% in all.