Dallas is getting more Love from Southwest

If Southwest is generally recognised as the original (and consistently most profitable) low-cost airline, then its home base of Dallas Love Field (DAL) can probably be considered the birthplace of the low-cost airline industry as we know it. While the airline still has its corporate headquarters at the airport as an operating base it ranks only seventh these days in the Southwest network. With 137 daily departures to 15 cities it lags way behind the airline’s biggest base at Las Vegas with 241 departures to 53 cities (Source: Southwest Airlines, November 2007).

Almost but not quite a monopoly at DAL

The story of Love Field during the last 35 years is long and complex. Basically when the enormous Dallas/Fort Worth airport was built in the early 70s it was expected that everyone would transfer there from Love Field. Southwest as a small new airline that had only begun intrastate operations in 1971 had never agreed to this and defended its right to stay at Love Field. 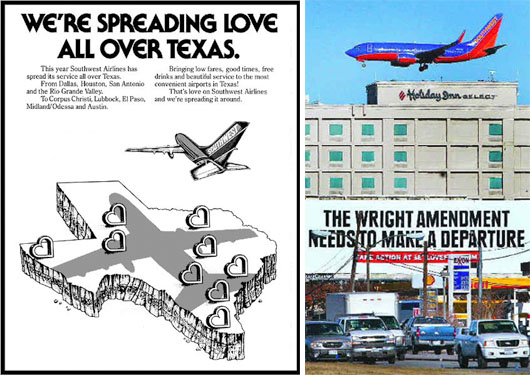 As this 1977 advert shows, Dallas Love Field’s range of destinations was artificially restricted to neighbouring states despite the advent of deregulation in 1978. The regulation – the Wright Amendment – will not be fully relaxed until 2014.

Having initially won its case things got complicated when the airline planned to start interstate operations in 1978 after US authorities deregulated the market. Although permission was granted Senator Jim Wright, a congressman from Fort Worth and majority leader of the US House of Representatives, was against the idea for obvious reasons and managed, in one day, to get the House to ban all interstate air services to and from Love Field. Southwest fought back and eventually, in 1979, the Wright Amendment was agreed. This allowed Southwest to operate non-stop flights to the four neighbouring states of Texas (Arkansas, Louisiana, Oklahoma and New Mexico).

In 1997 Alabama, Mississippi and Kansas were added to the list of allowable destinations and Missouri was added in 2005. In 2006 a new plan was agreed regarding the future use of Love Field which should result in its repeal in 2014. (Details of this can be found on the airport’s website.) Suffice to say that over the years Southwest has had a virtual monopoly at the airport with traffic volumes in the last decade averaging around six and a half million passengers.

In the last two years Southwest’s traffic at DAL has grown by 31%.

The destinations and weekly frequencies operated by Southwest this winter at DAL are summarised below:

Of the 15 destinations seven are in Texas and these routes account for 63% of flights from Love Field. Competition is currently provided by American Airlines (to Austin and Kansas) and by Continental (to Houston Intercontinental) using small regional jets.

While the airline still has its headquarters at DAL, it ranks only seventh these days in the Southwest network.

For details of Southwest’s average fares from DAL check out this week’s farewatch.