Tunisia losing out to Morocco and Egypt

Tunisia’s burgeoning tourism industry was dealt a major blow in April 2002 when a terrorist attack outside a synagogue in Djerba killed 16 people including 11 German tourists. In-bound tourism, especially from the key German market, was immediately impacted and traffic in both 2002 and 2003 was around 15% below the 2001 level of 9.5 million passengers across Tunisia’s three main airports at Tunis, Monastir and Djerba.

Although traffic eventually rebounded in 2004 and 2005 it stagnated once more in 2006 with growth of just one percent. In recent years Tunisia has apparently lost out significantly on in-bound tourism growth to near neighbours Morocco and Egypt who have experienced much higher growth rates. Morocco’s traffic has grown 96% between 1997 and 2006 while Egypt’s passenger numbers leapt 91% over the same period. In comparison Tunisian airport traffic has grown by just 26%.

UK and German markets down in 2007

Official traffic figures for 2007 have yet to be revealed but an examination of some of the key country markets where data is available contains mixed messages. Figures from DGAC show that in the first half of 2007 traffic from France to Tunisia was up 5% to 1.57 million. The French market represents around 30% of Tunisian airport traffic and is the single biggest country market. However, traffic from France to Egypt and Morocco was also up 9.2% and 12.8% respectively during the same period.

The German market (which represents around 10% of Tunisian airport traffic and is the leading market for Monastir), looks likely to be down about 6% in 2007 to 1.2 million passengers. This makes it two years in a row that traffic has fallen as passenger numbers were also down 3% in 2006. Finally the UK market was down nearly 8% in 2007 to just 650,000 passengers.

New airport at Enfidha should open next year 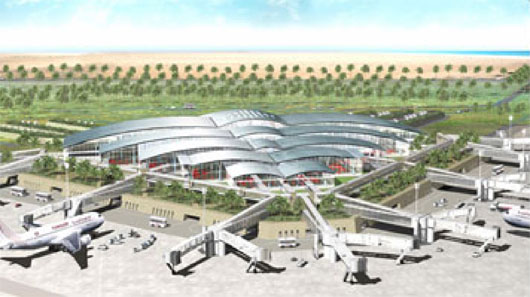 With traffic growth at Tunisian airports lagging behind their North African near-neighbours in Egypt and Morocco, the need for a new airport seems hard to justify. However, a new facility at Enfidha capable of handling seven million passengers a year is scheduled to open in mid-2009.

With little apparent growth in the overall market it may seem surprising that a new airport at Enfidha, 60 kilometres north of Monastir and close to many of the newest hotel and resort developments, is scheduled for completion in 2009. TAV, the Turkish airport operator, won a contract to build and operate the new airport as well as take over running the existing Monastir airport.

Work began on the project last July and is projected to cost €410 million. Initial design capacity for the terminal will be seven million passengers, expandable to 22 million over the next 40 years. Whether this new airport will help stimulate demand, remains to be seen.

Traffic at Monastir is exceptionally seasonal. In 2006 more than 700,000 passengers passed through the terminal during the peak August period yet in January, February and December the airport handled just 100,000 each month. Passengers on charter flights still represent between 80% and 90% of all traffic to/from Monastir and Djerba.

National flag carrier Tunisair, in which the government still has a majority stake (and Air France 6%), carries around 3.8 million passengers on a fleet of 30 Airbus and Boeing aircraft. Its regional operation was rebranded from Tuninter to Sevenair in 2007 when a CRJ900 was added to the fleet of mostly ATRs. Sevenair operates domestic services as well as a handful of international destinations such as Malta, Palermo and Tripoli.

Privately-owned Nouvelair (who operate a fleet of 16 A320/A321 aircraft) and Karthago Airlines (which operates a small fleet of 737s) provide a mix of charter and scheduled flights and offer some competition to Tunisair.

Where are the LCCs?

An obvious question when looking at the Tunisian market is “Where are the low-cost carriers?” Unlike Morocco which has embraced an ‘open-skies’ policy with the EU, Tunisia has so far failed to grasp this opportunity and is clearly losing out as a result. Compared to Morocco buying property in Tunisia is much more of a bureaucratic nightmare than in Morocco and winters are not as warm as they are in Egypt. Transavia’s French subsidiary has started flights from Paris Orly to Monastir, Djerba and Tozeur but so far they are the only European LCC to venture into the market.