With flights operating to Graz (just 86 kilometres away) and Tokyo Narita (9,149 kilometres away), Austrian’s network at Vienna covers a wide spectrum of routes, though it is the range of flights it operates to Central and Eastern Europe that give the airline its main competitive advantage. After disastrous losses in 2005 and 2006, the airline hopes to report a profit for 2007 after major restructuring and cost-cutting. This has included major changes to the airline’s network with a major reduction in long-haul flying. Around 60% of Austrian’s traffic at Vienna is transfer traffic. 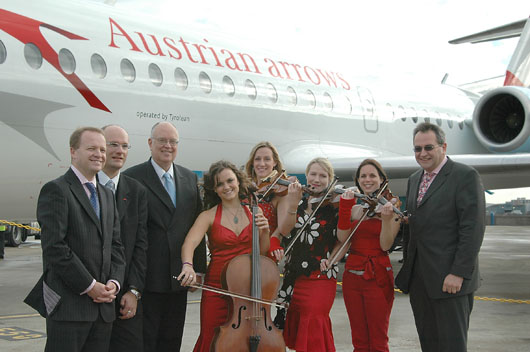 Serving over 100 destinations from Vienna

Austrian flies to 103 destinations from Vienna (VIE) and has no direct competition on around 43% of the frequencies it operates. Since these include several long-haul routes, it means that Austrian has a monopoly on nearly 53% of the ASKs it flies from VIE. This includes (in winter at least) routes to Bologna, Budapest, Dresden, Geneva, Lyon, Oslo, Stockholm and Venice in Western Europe, as well as Beijing, Delhi, Mumbai, Tokyo, Toronto and Washington further afield.

These three routes represent around 6% of Austrian’s capacity at VIE, though, due to the mostly shorter sector lengths involved, only around 2.2% of total ASKs.

In 2007, Swiss carried 9.141 million passengers across its entire route network at an average load factor of 75.0%. Passenger numbers were up 4.2% in 2007, while load factor also improved by almost one percentage point. However, ASKs were down 13.4% as the airline abandoned a number of long-haul flights to destinations such as Colombo, Kuala Lumpur, Melbourne, Singapore and Sydney.

Analysis of winter schedules reveals that, unsurprisingly, Germany is the main country market for Austrian for flights to/from Vienna. 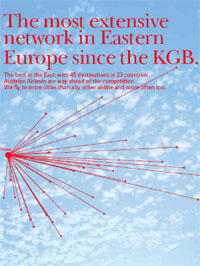 In terms of geographic region 58% of capacity is on flights to Western Europe, but an impressively high 25% of seats are on routes to Eastern/Central Europe. This includes flights to such relatively obscure markets as Armenia, Azerbaijan, Belarus, Montenegro and Moldova. On 19 of the 35 routes it operates in this region Austrian is the only carrier.

During 2007, SkyEurope developed a significant presence at Vienna and this winter the Slovakian-based LCC flies to 19 cities, of which 17 are also served by Austrian. Only on routes to Lisbon and Naples does SkyEurope enjoy a proper monopoly. This will ensure that Austrian’s prices remain competitive on many routes.

Along with neighbours Switzerland, Austria is co-hosting this year’s Euro 2008 football championships. Hopes are not high for the national team as they are currently 84th in FIFA’s world rankings (just ahead of Libya!), well behind the Swiss in 41st place. However, Austrian has not held back in using the tournament in its publicity, including creating special liveries for several aircraft in its fleet.

Although a member of the Star Alliance since 2000, Austrian is still an independent company with a wide range of investors including the Austrian state. A Saudi Arabian entrepreneur has recently indicated an interest in securing up to 30% of the airline’s shares. It is likely to take several months before this investment goes ahead, assuming that it is approved by Board members and shareholders.