Italian traffic growth not being held back by Alitalia’s woes 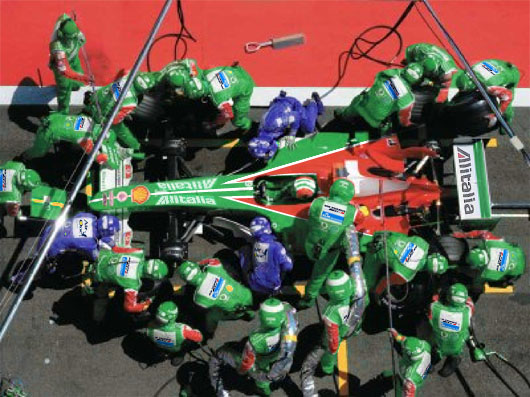 Alitalia is hoping foreign influence and talent can help turn around its fortunes in the same way that Ferrari’s racing fortunes were revived in the mid-1990s by Jean Todt (French), Michael Schumacher (German) and Ross Brawn (British). Air France/KLM is currently favourite to help get Alitalia back to winning ways but Air One has not yet given up hope of getting involved.

Despite the ongoing soap opera that may (or may not) soon determine the future of Alitalia, Italy’s airport’s reported impressive 10% growth in 2007. This is the fastest rate of growth since 2000, when traffic grew by 12%.

Milan Malpensa is currently the busiest airport for international flights, but this is likely to change when Alitalia drops a raft of routes this summer from the airport as it ditches its dual-hub strategy to focus on Rome. Nearly all of Italy’s 21 biggest airports reported growth in 2007, the exception being Olbia on the island of Sardinia where traffic declined 2% last year.

The fastest growing airports in 2007 were Florence, Pisa, Alghero and Bari, which all reported traffic growth of over 20%. Both of Rome’s airports grew by 9%, though Ciampino’s growth was held back after local authorities decided to impose a movement limit at the airport, a decision that Ryanair claimed was politically motivated to reduce competition with Alitalia at Fiumicino. While Milan Malpensa and Bergamo grew by almost 10%, Milan Linate grew by just over 2%. Despite this, to the bewilderment of many, Linate managed to pick up an OAG Airport Marketing Award at last year’s Routes conference.

Alitalia dominant in Rome and Milan, but nowhere else

Though Alitalia has around a 40% share of capacity at the top three airports, at other airports a number of different airlines offer the most seats.

Ryanair is the biggest carrier at Milan Bergamo, Rome Ciampino and Pisa, where it has more than 50% of capacity at each airport. Air One is the largest carrier in Bari, Naples and Turin, while Meridiana is the leading airline at Bologna, Cagliari and Verona. Windjet is number one in Catania.

Alitalia still has one-third of domestic market, but only one-sixth of international market

On international routes Alitalia’s available seat capacity is rapidly being caught by Ryanair. While the flag-carrier currently has an 18% share of the market, Ryanair, which operates from over 20 airports in Italy and has bases in Milan (six aircraft), Pisa (three aircraft) and Rome (five aircraft), has over 15% and is gaining rapidly. Lufthansa (7.4%), easyJet (6.1%) and Air France (5.0%) are the only other carriers with at least a five percent share of the market. LCCs now have an estimated 38% of capacity on international scheduled routes into and out of Italian airports.

Four countries dominate international traffic flows to and from Italy. Germany just beats Spain, the UK and France, with all other country markets much smaller.

In the German market capacity is dominated by Lufthansa followed by Ryanair, TUIfly, Air Berlin and then Alitalia, which has less than 10% of the market. On routes to and from Spain Ryanair is the leading carrier followed by Iberia, Vueling, Alitalia, Click Air and easyJet. In the highly competitive UK market Ryanair again leads the way with 40% of the market, followed by British Airways, easyJet and Alitalia. Only in the French market are the two leading carriers the national flag-carriers, with Air France ahead of Alitalia, followed by easyJet, Ryanair and MyAir.

Italy has a range of home-grown LCCs. Volareweb, operating a fleet of A320s, was at one time Europe’s third largest LCC until it collapsed in November 2004. It was reborn in 2005 and has been a niche carrier at Milan Linate until this winter when it embarked on a major expansion programme from Milan Malpensa under Alitalia’s guidance.

MyAir, which also started out operating only A320s, is now ‘doing a JetBlue’ and combining A320 operations with smaller jets, in this case Bombardier CRJ900s. Windjet mixes charter flights with primarily scheduled domestic flights from Sicily (Catania and Palermo) to the Italian mainland. Blu-Express, a subsidiary of charter airline Blue Panorama, operates mostly domestic services from Rome Fiumicino.

Nearly all of these carriers have kept well away from attempting to enter the highly competitive UK or German markets, which consist mainly of in-bound leisure passengers, as these are dominated by LCCs based in those countries or the local flag-carriers. However, Volareweb did start serving Manchester from Milan Malpensa at the start of the winter season with five planned weekly flights in direct competition with Flybe, but the route was terminated in a matter of weeks.