Since joining the EU in May 2004, Latvia has benefited considerably from a huge increase in inbound tourists. Traffic at the country’s main airport at Riga has more than quadrupled from just over 700,000 passengers in 2003 to nearly 3.2 million in 2007.

Monthly traffic figures reveal that demand follows a typical northern European profile with a peak in August when leisure demand is at its highest, and a dip in January and February.

Despite not having any aircraft based there, Ryanair has managed to grab 28% of traffic at Riga airport by operating services from its Bremen, Dublin, Frankfurt Hahn, Glasgow Prestwick, Liverpool, London Stansted and Stockholm Skavsta bases. There is also a daily service to Tampere in Finland and last November additional routes were started to Bristol, East Midlands and Shannon, while Milan Bergamo was added in January. 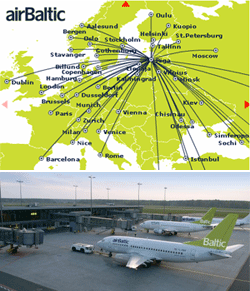 Apart from AirBaltic and Ryanair a number of European legacy carriers serve Riga, including Aeroflot, Austrian, CSA, KLM, LOT, Lufthansa and SAS. Other LCCs operating to the airport include Aer Lingus (from Dublin), easyJet (from Berlin SXF) and Norwegian (from Oslo and Trondheim). From May, Germanwings will start thrice-weekly services to Cologne/Bonn, while the airport reports that easyJet plans to launch several new routes from the airport in 2008, though none have been confirmed as yet.

London is most popular route

According to the airport’s statistics, London is the most popular route with over 300,000 passengers in 2007. The UK has apparently forgiven Latvia for being hosts of the Eurovision Song Contest in 2003 when the UK, for the first time in its long and distinguished history, scored ‘nul points’ thanks to the rather tuneless effort of a duo called Jemini.

To cope with the phenomenal growth at the airport an extension to the existing terminal is planned for completion in 2010 as well as a project to extend the runway to 3,200m and develop an onsite business park. One terminal development that has already been completed is to segregate passengers flying to and from Schengen and non-Schengen countries. There are also plans to develop three hotels close to the airport. One of these will be a 5-star Radisson SAS while another will apparently belong to Ryanair.

Apart from Riga, Latvia has one other airport with international services. Liepaja, in the west of the country, is currently developing its route network and apart from twice-daily flights to Riga, Air Baltic also offers direct services to Copenhagen and Hamburg.