When Morocco decided to sign an ‘open-skies’ agreement with the EU, it was clear that LCCs would have a major role to play in the growth of the air travel market. While national carrier Royal Air Maroc created Atlas Blue as its ‘in-house’ LCC, another Moroccan-based LCC was formed by a combination of local and international business interests.

According to the airline’s website, Jet4you carried 150,000 passengers in its first year of operation and plans to have 10 aircraft by 2010, carrying 1.5 million passengers. 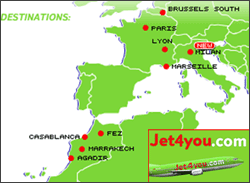 Since its launch, Jet4you’s focus has been on serving the French market, which makes sense given the country’s lack of home-grown LCCs and the strong economic and social links between France and Morocco.

Destinations in France so far include Lyon, Marseille and Paris Orly with non-French destinations currently limited to Brussels Charleroi and Milan Malpensa. This winter, all routes are served at least thrice weekly with the Casablanca – Paris Orly route served twice daily on most days.

A closer look at the current schedule reveals that the fleet has grown to four aircraft, of which three are based in Casablanca and one in Paris Orly. The Paris based aircraft serves Agadir, Fez and Marrakech.

Bigger than easyJet and Ryanair in Morocco

Analysis of the international scheduled market this winter reveals that Jet4you.com is already established as the fourth biggest carrier to/from Morocco.

The French DGAC reported that in the first half of 2007 passenger numbers between France and Morocco reached just over two million – almost a 13% increase on the previous year. This rate of growth bodes well for the future of Jet4you, even considering the growing competition with the likes of Transavia France entering the market. Since its launch in May 2007, the airline has operated from Paris Orly to Agadir, Fez and Ouarzazate and has revealed plans to start serving Marrakech twice daily from the start of the summer season.