Scotland: are the boom times over? 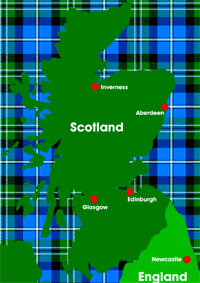 Between 1995 and 2005 total passenger traffic at Scotland’s four main airports of Aberdeen, Edinburgh, Glasgow International and Glasgow Prestwick (all of which except Prestwick are owned by BAA) grew by at least 5% every year, including the period after ‘9/11′. During that period passenger numbers more than doubled from 11.2 million to 22.5 million.

However, latest figures reveal that for the second successive year growth across these four airports has averaged less than 3%, despite the launch of many new routes some of which have been supported by the Scottish Route Development Fund (RDF). Significantly, Edinburgh overtook Glasgow International (GLA) last year to become the country’s leading airport as GLA’s traffic actually fell for the first time in many years.

A closer look at existing capacity on scheduled routes shows that nearly 70% of seats and almost 80% of flights at Scottish airports are still allocated to domestic services. In summer these figures will be less as seasonal international holiday flights kick-in, but the dominance of the domestic market remains clear.

British Airways remains the leading player in the domestic market from Scottish airports with its main routes linking Aberdeen, Edinburgh and Glasgow to London Gatwick and London Heathrow, plus routes from Edinburgh and Glasgow to London City accounting for nearly three-quarters of its Scottish capacity. easyJet’s Scottish domestic network also focuses on London, but in addition has multiple daily flights to Belfast International and Bristol.

Flybe on the whole avoids London, instead serving regional centres such as Belfast, Birmingham, Exeter, Leeds/Bradford, Manchester, Norwich and Southampton. In terms of flights Flybe is second only to BA on Scottish domestic routes.

If bmi and bmibaby routes are combined they would challenge easyJet as the second biggest carrier in Scotland for domestic services. Bmibaby operates daily flights from Birmingham, Cardiff and East Midlands to both Edinburgh and Glasgow, as well as serving Aberdeen from Birmingham.

Ryanair’s biggest domestic route from Scotland is from Glasgow Prestwick to London Stansted, though frequency on this route has been falling in recent years. From Prestwick the airline also serves Belfast City, Bournemouth and Derry, while also linking Inverness with East Midlands.

In terms of flights operated Eastern Airways has almost 10% of the Scottish domestic market, operating primarily from Aberdeen and Inverness to non-London airports. Similarly, Loganair, operates eight-seater Islanders in its own name, while its Saab 340s operate on behalf of British Airways. Loganair recently agreed to become a franchise carrier for Flybe, meaning that Flybe may soon be operating more domestic flights in Scotland than any other airline.

Ryanair, easyJet and FlyGlobespan are the three major players on Scottish international routes with Ryanair operating twice as many seats as any other airline, at least in winter.

In summer, FlyGlobespan’s highly seasonal schedule makes it the second largest airline in terms of seats and it then offers more routes than Ryanair. British Airways no longer operates any international routes from Scotland instead preferring to offer connections via Gatwick and Heathrow. KLM also feeds its hub at Amsterdam with multiple daily flights from Aberdeen, Edinburgh and Glasgow.

Wideroe’s 5% frequency share is down to two niche ‘energy’ routes connecting Aberdeen to Bergen and Stavanger in Norway. A total of 28 airlines currently operate international flights into and out of Scottish airports.

Role of the Route Development Fund 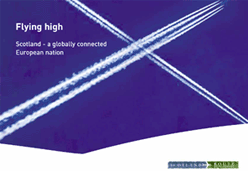 In November 2002, the Scottish Route Development Fund (RDF) was created with the intention of helping to develop more direct air services to Scotland, which would benefit business or inbound tourism. Initially all new routes were required to operate at least five times weekly. The first route to receive such support was launched in March 2003 and five years later there are still over 30 routes which owe their existence to the RDF. These include routes operated by bmi, Continental, Eastern Airways, easyJet, Emirates, Ryanair and Wizz Air.

A total of £14.4m ($30m) has been spent in the last three years in launch aid, but at the end of 2007 the Scottish Government ended the scheme claiming it was incompatible with new EU regulations. However, this drew huge criticism from some politicians and business claiming that the fund had generated £100 million in economic benefit to Scotland. Details of how much each airline receives for each new route have never been disclosed for ‘commercial reasons’.
Not surprisingly, routes to Mediterranean holiday destinations have not been supported by the fund as these would be seen as merely subsidising Scottish holidaymakers wanting to leave the country. However, routes to the major centres of Barcelona and Madrid have been supported as has Ryanair’s service to Girona near Barcelona. 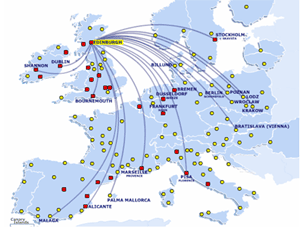 Despite a simmering feud with BAA regarding airport charges at its largest base at London Stansted, Ryanair recently announced that BAA-owned Edinburgh would become the airline’s 27th base this autumn. Ryanair first started serving Edinburgh from Dublin in September 2001 as a knee-jerk reaction to the entry of Go on the route. Prior to this Aer Lingus had enjoyed a monopoly position. Shannon services were added in October 2006, while flights to Alicante were launched this week. Links to the airline’s bases in Bremen, Frankfurt Hahn, Marseille and Pisa will be added at the start of the summer season.

From mid-September a further 11 new destinations will be added to take Ryanair’s Edinburgh network to 18 routes. These new flights include four Polish routes (to Krakow, Lodz, Poznan and Wroclaw), two more Spanish routes (to Malaga and Palma) as well as Berlin, Billund, Bournemouth, Bratislava and Stockholm.

Meanwhile, traffic at Ryanair’s Glasgow Prestwick base has stabilised at around 2.4 million in each of the last three years despite the addition of occasional new routes. This winter, Ryanair serves 25 destinations from Prestwick, but is offering a similar number of flights per week as three years ago when only 14 routes were on offer.