It may come as a surprise that there is room for a third Irish airline to have its major base at Dublin airport given that Ryanair and Aer Lingus are involved in a fair old scrap there. But in 2007 ATR-operator Aer Arann carried more than 800,000 passengers through Dublin Airport, making it the third largest carrier. Since 2002 the airline (which can trace its origins back to 1970) has almost trebled its passenger numbers to well over one million.

The dip in scheduled passengers in 2007 was compensated by an increase in charter traffic which last year reached almost 200,000 passengers. These included special ad-hoc flights for various rugby and football teams, plus the drivers and support crew for teams competing in Rally Ireland – a round of the World Rally Championship, which took place in November.

In addition to its existing Dublin, Cork and Galway bases, Aer Arann made Waterford its fourth base during 2007. Analysis of the winter schedules shows the importance of Dublin to the airline’s network. 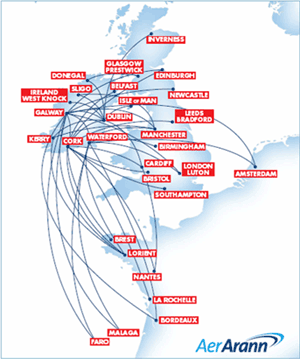 From Dublin, Aer Arann operates non-stop to nine destinations, six in Ireland and three in the UK. Cork is connected to seven destinations (of which five are in the UK) and Galway offers six routes (of which four are in the UK). At Donegal, Sligo and Waterford, Aer Arann is the only carrier offering scheduled services while at Galway the airport has a 95% share of capacity and at Kerry a 43% share. During 2007 six new regional routes were launched from Birmingham, Bristol, Cardiff, Manchester and Newcastle. Despite a significant presence at many Irish airports Aer Arann does not operate to or from Ryanair dominated Shannon.

In 2004 the airline launched its first routes to mainland Europe, Lorient and Nantes in France. Having got a taste for such exotic destinations the airline has entered into a franchise agreement with Nex Aviation which will enable it to start longer-haul international routes from May 2008 using a BAe 146-200. New destinations include the Mediterranean ‘beach’ destinations of Faro and Malaga, as well as Bordeaux and Brest in France. Amsterdam will also be served for the first time with four-times weekly direct non-stop flights from Waterford with onward connections to Galway.

Five new ATR72-500s due for delivery this year